President of St Patrick's College, Professor Daire Keogh, talks to us about the new buildings and the upcoming merger with DCU. 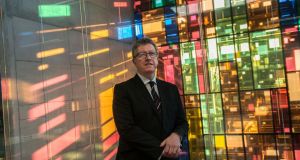 President of St Patrick’s College Drumcondra Daire Keogh in the new library: ‘The beauty of the library is that it will engage with the city; the college was behind the wall for a long time.’ Photograph: Brenda Fitzsimons 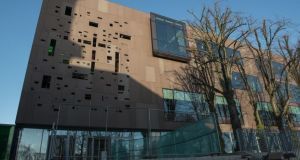 An outside view of the new library. Photograph: Brenda Fitzsimons / The Irish Times 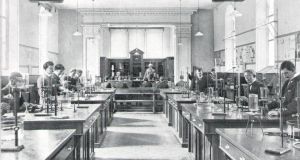 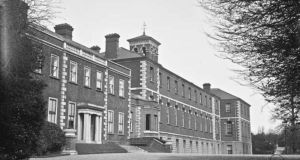 Then and now - an older photo of St Patrick’s exterior 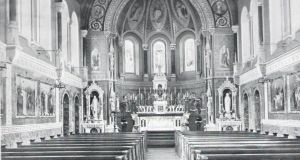 The chapel, pictured in 1908 - it is now a resource centre 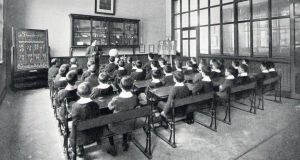 Past students in a lesson

Most people’s knowledge of St Patrick’s College in Drumcondra begins and ends at the gates – bypassed by a multitude daily on the airport road. Less well known is the fact that Enda Kenny, Michael Noonan and Brendan Howlin, probably Ireland’s three most powerful politicians at present, all studied there.

The iron grip of the Catholic Church that once made this teaching training college a home of “anti-intellectualism” – to use past pupil John McGahern’s description – has long been lifted. And now St Pat’s is entering a new phase of modernisation, opening up to the local community and revamping its course offerings under a merger with Dublin City University.

A new library, the centrepiece of a €50 million redevelopment, will open next week, along with a new pedestrian entrance lined by trees from the original 18th century estate.

“The beauty of the library is that it will engage with the city; the college was behind the wall for a long time,” says college president Daire Keogh.

“The more people we can bring in the better chance we have of introducing the possibility of teaching to a wider variety. Ethnic minorities are very underrepresented in teacher education. That would be a priority for us to increase that.”

This is part of an “incorporation” plan, sponsored by the Department of Education, which will see the number of teacher training colleges across the State reduce from 19 to six.

At St Pat’s, trainee teachers who might once have been segregated on denominational lines will undergo a common programme that utilises the expertise of the four institutions. A unifying Institute of Education comprising 120 staff will be located on what shall become the St Patrick’s campus of DCU, says Keogh.

“There will be nothing in the British Isles, and practically nothing in Europe, that would compare to us in terms of scale.”

Currently, St Pat’s has 2,600 students. This will jump to 4,000 across courses from early years qualifications through to PhDs. Plans are afoot for academic chairs in assessment and Catholic education, and for research units in literacy and numeracy and STEM (Science, Technology, Engineering, Maths).

“We were very fortunate DCU never did what we did and we never did what they did. So there was never any competition and I think a good metaphor for that is that the overlap between our library and the DCU library is just 5 per cent,” says Keogh.

The redevelopment is aimed at blending “the traditional with the applied”. Students can retreat into digital “contemplation pods” but they also “want to be in a physical space together”, says librarian Orla Nic Aodha, who helped move 200,000 books into the new building in four days.

As part of its next phase of development, the college has planning permission to add two storeys to its lecturing block.

Keogh says the college will “cater for Catholic, Protestant or dissenter”, noting its strong links with multi-denominational patron Educate Together. However, like other State-funded teacher training colleges, it continues to recommend students take the Certificate in Religious Studies (CRS) to aid their employment prospects.

“Different patrons have obviously different requirements and that’s their prerogative,” explains Keogh. The CRS is required for those who wish to teach in religious-run schools.

He acknowledges that some change is necessary in school patronage to “get a better integrity within the system” but says it’s beyond the college’s control. Were patronage to become more diverse then schools could have a “clear ethos” allowing parents and teachers to choose where to go in accordance with their genuine beliefs, Keogh adds.

“I don’t think the current system, one size fits all, is suitable. But that’s a political issue and one for the patrons.”