An industry for creatives – and many side routes in 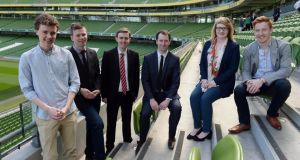 Nominees for Newspaper of the Year (Callem Trimble-Jenkins, The Bull; Barry Lennon , The Edition; Cormac Duffy and David Corscadden of The University Observer; Catherine Healy of The Trinity News, and Michael Cogley, The College View) at the KBC National Student Media Awards, in April. Photograph: Eric Luke

The media industry is usually regarded as an industry for creative people with strong verbal and communication skills. Typically, students applying for courses in media and journalism enjoy writing and research and probably performed well in Leaving Cert subjects such as English and history. But the industry also includes designers and web developers, who can earn good money in technical roles.

Where to study media and communications

But the University of Limerick and Maynooth University are nipping at DCU’s heels.

Maynooth offers a BA in media studies where students learn about radio and TV production alongside an analysis of the media, and a BA in digital media, which combines digital media with computer science.

The Dublin Institute of Technology also offers a well-regarded journalism course, as does Griffith College, Dublin, while NUI Galway students can study for a BA in arts with journalism.

The Institute of Art, Design, and Technology in Dún Laoghaire offers excellent media courses, including a renowned animation degree, film and television production, and photography.

Students with an interest in media or communications don’t necessarily have to take an undergraduate media or communications course: UCD has two award-winning student newspapers, a campus TV station, and a radio station, where many eminent journalists cut their teeth. If you want a career in media you could do an undergraduate degree – whether in science, engineering, art, law, business, while getting some journalism experience – and then apply for a journalism master’s; you’ll probably learn as much in that year as you would in a three-year undergraduate course.

Meanwhile, there are many opportunities outside the traditional route of journalism, with the digital world creating unprecedented opportunities.

Digital marketing and communications is a major growth area with good employment prospects. Social media means that companies of all sizes need a good communications strategy.

The average salary is € 26,000 according to the 2012 Gradireland survey. Payscale puts this figure at € 26,577. But this is significantly higher in some newspapers/

magazines and broadcasters, and lower in others. Internships and freelancing are common in the early years, so it will take some time to reach this level. When you’re freelancing, time is money: the more work you do, the more you’ll earn, and it can be very difficult for young journalists to make a decent living.