Brexit may lead to surge in third-level students in Ireland 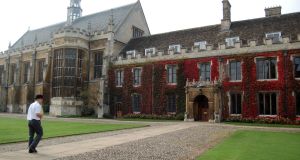 The University of Cambridge in England. Education authorities are concerned that the fallout of the Brexit vote will lead to a dramatic increase in the number of Irish third-level students choosing to study in Ireland. File photograph: Loic Vennin/AFP/Getty Images

Education authorities are concerned that the fallout of the Brexit vote will lead to a dramatic increase in the number of Irish students studying at third-level in Ireland.

Some 10,905 Irish students currently study in UK colleges and universities.

The head of the Higher Education Authority said many of these students may opt to study at home in the future given uncertainty over fees for Irish students in the UK.

Tom Boland said that in principle Irish students would be treated as international students – who face much higher fees – in UK universities unless a deal was struck with authorities there.

He said there would likely be greater demand for places in Irish universities not just from Irish students, but from EU students seeking to study in an English-language environment.

“Whether this is a success or a failure all depends on what we do with funding higher education in the short to medium term,” Mr Boland said.

An unpublished expert group report on the future funding of third-level, which was completed prior to Brexit, estimates that numbers studying at higher level will jump by nearly 30 per cent over the next 12 years.

The expert group, chaired by Peter Cassells, estimates that an extra €1 billion in funding is needed just to keep pace with demand.

It warns that a failure to do so will result in a slow deterioration in teaching quality, with overcrowded colleges and bigger lectures.

Compared with Irish students in the UK, much smaller numbers from Britain and Northern Ireland study in Ireland.

Latest figures, for example, show there were just over 1,000 students from Northern Ireland and 1,800 from Britain studying in Irish colleges.

Mr Bruton said his department had been working for years with Northern officials in seeking to encourage cross- Border participation in education and training.

Fianna Fáil’s education spokesman Thomas Byrne has called for assurances that third-level students can continue to study abroad without financial or residency issues.

The Minister said Irish students had no immediate reason to be fearful about their university courses or their “EU student” status for at least a year, but there was uncertainty beyond this point.

“We need to ensure that existing students will be able to continue their studies, and make provisions so that the current third-level options for students in Ireland, Northern Ireland and Britain remain open to them.”

Trinity College has warned that the Brexit vote will have “a long-term impact” on Irish universities.

It could hinder the tradition of students moving between the islands, as well as important research activity.