ASTI conference hears call for reversal of pay cuts of 2011 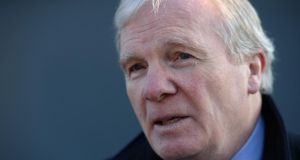 ASTI general secretary Pat King. He is due to retire at the end of the year

Teachers at the ASTI conference have called for a reversal of the pay cuts which were introduced in 2011 and an end to different pay scales for teachers based on when they entered the profession.

Delegate Bernard Lynch said it was not enough for the union to “write letters and talk to the Department of Education”, and that teachers needed to put pressure on politicians when they call to their doors looking for votes in next year’s general election.

Peter Keany, a teacher from Mullingar, said there was inequality in the union because teachers were on three different rates of pay.

“Without change, the private sector will outpace us again, but now we have the chance to negotiate pay and ensure that there is equal pay for all members.”

Teachers at the conference railed against a new promotion system which would mean school management could hire or fire them from posts of special responsibility such as year heads, or on an annual basis.

The changes are being proposed by the Joint Managerial Body and the Association of Community and Comprehensive Schools, which oversee the running of the vast majority of post-primary schools in Ireland.

Delegate Michael McGrath said the proposed changes would lead to promotion and demotion on an annual basis.

“Do we want to walk all over each other to get up the ladder? Collegiality will be gone, catfights will be in.”

Another delegate, Mark Walshe, expressed a concern that teachers could be offered a post of responsibility in return for supporting the proposed new Junior Cycle changes.

Delegates voted by 153 to 119 against a proposal that the next general secretary of the union should be directly elected by members after a closed debate that extended over two hours.

Speakers expressed concern that the job required a particular skill-set which should not be decided by a popular vote.

The union already has a president who is directly elected on an annual basis.