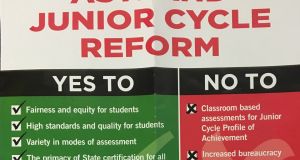 ASTI shop stewards have been asked to distribute this poster to staff members and to display it in “a prominent position in their classrooms”.

The Association of Secondary Teachers Ireland (ASTI) has been accused of targeting pupils after it emerged that members have been asked to display posters highlighting the union’s opposition to junior cycle reform in “prominent positions” in classrooms.

The move has drawn sharp criticism from some secondary students and parents who say it is an attempt to make pupils part of the union’s dispute with the Government.

The new junior cycle, which replaces the Junior Cert, is being rolled out across all secondary schools and seeks to provide a broader assessment of students’ skills and achievements. However, the ASTI has directed members not to take part in any classroom-based assessments linked to the changes.

English is the first exam in which the reforms are being applied, followed by business studies and science in 2019.

The ASTI poster, issued in recent weeks by the union, states that the union says “no to” classroom-based assessments, “increased bureaucracy leading to an unmanageable workload”, a “narrowed curriculum” and “ad hoc school-based oral examinations”.

The poster was distributed to ASTI shop stewards and was accompanied by a letter from the union’s general secretary, Kieran Christie.

An accompanying letter – seen by The Irish Times – states that it should be placed in a “prominent position” in classrooms.

An ASTI spokesperson confirmed that the poster and accompanying letter had been sent to shop stewards in recent weeks.

“The poster was distributed to individual members following requests from members and activists for such information. The poster is aimed at members of the ASTI.”

The Irish Second-Level Students’ Union – which supports junior cycle reform – said it will now seek to inform all secondary students about the benefits of the reforms, which it supported in a democratic vote.

Union president Jane Hayes Nally said she hoped there would be a resolution to the dispute so no student is disadvantaged. “We believe that there is always a great space for respectful dialogue on matters such as this between students and teachers,” she said.

“We ultimately hope that any issues regarding the reforms will be resolved before any student is prevented from achieving a full junior cycle profile of achievement.”

The issue was the subject of fresh talks between the ASTI and the Department of Education yesterday. Little progress was reported, however.

Hundreds are secondary schools are set to close indefinitely from next Monday if no resolution if found to a wider dispute around teachers’ pay and conditions.

The ASTI’s opposition to the junior cycle changes stems mainly from its belief that teachers should not have to mark their students’ work for State exams.

The union insists it was still within Mr Bruton’s gift to ensure students will not be deprived of 10 per cent of marks if they do not participate in classroom-based assessments in English.