A dozen issues to dominate Irish education in 2016

Here are 12 issues you are likely to hear plenty about next year, from school patronage to industrial strife 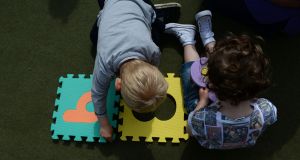 From September next year, the “free preschool year” will be expanded to ensure children can remain in preschool until they start primary school. Photograph: Dara Mac Dónaill

Here’s a challenge: is it possible to guarantee unbaptised children access to their local religious-run school without collapsing the entire system of denominational education? That’s the dilemma facing the next government. The campaign for equal access to school will gather pace next year with the establishment of a number of formal lobby groups ahead of the general election campaign.

Almost everyone – including the churches – agrees that controlling 96 per cent of primary schools is not in anyone’s interest in an increasingly pluralist society.

But ensuring unbaptised children have access to their local school will mean navigating a complex array of legal landmines. Competing articles of the Constitution protect both the right to religious education and protection against religious discrimination. The next attorney general will be kept busy over the coming months.

After seven years of spending cuts and rising student numbers, our universities and colleges are under pressure as never before.

If anything, it is set to get worse: high birth rates mean numbers are likely to soar by 30 per cent over the next 12 years. An expert group is due to report to the Government shortly with funding options to help make ends meet.

Most expect it will lean heaviest on an “income-contingent” loan model for students. Most of the main political parties, with the exception of Sinn Féin, are broadly in favour. Student opinion is mixed.

If the next government is going to tackle the issue, it will most likely try to tackle it early on rather than leaving a potentially divisive issue too close to an election.

From September next year, the “free preschool year” will be expanded to ensure children can remain in childcare until they start primary school.

The €45 million extension is projected to accommodate an additional 60,000 children and will be worth an average of €1,500 to the parents of young children.

But there are already teething problems: childcare providers say they don’t have the funds to expand their services to meet demand, although Government officials are confident the places will be provided.

There will also be a big focus on the quality of preschool tuition. The first education-focused inspection reports of preschool are due to be published early in the new year.

Fitness-to-teach hearings for teachers have been promised for at least a decade or more. In 2016 they are finally due to get under way. The hearings, delayed in part because of disagreement between the teacher unions, will be held in public by default. But a witness or teacher who is the subject of a complaint may apply to have some or all of the hearing heard in private. The Teaching Council, on which teachers have an in-built majority, had recommended that a committee be allowed to decide on the format of hearings on a case-by-case basis. However, Minister for Education Jan O’Sullivan over-ruled this, citing the standard practice of public hearings in the medical and legal professions.

Rarely a day goes by without a siren warning over the need to urgently improve the quality and quantity of graduates in jobs-rich areas such as science, technology, engineering and maths.

The reality is that Ireland’s performance in most of these subjects is consistently average. A rising minority of first-year students who progress on to third level require extra maths supports to pass exams. A long-awaited review of this area is set to call for a national strategy to improve the quality of tuition and provide greater information on careers.

With more jobs due to be created in the sector than there are graduates to supply them, this is an issue that won’t go away any time soon.

After all the huffing and puffing, strikes and votes, long-awaited junior cycle reforms are due to be rolled out in the spring. But just one in four schools will be in a position to deliver the changes.

That’s because they are either fully or partly staffed by members of the ASTI, which has opposed the measures. This will lead to the bizarre situation of some students in a school taking part in new classroom-based assessments and others across the road being deprived of them.

Much hinges on the success of the reforms. They might well pave the way for much-needed changes to the way secondary students learn, fostering the ability to think critically, innovate and adapt to change. If a creative solution is found to the stand-off next year, it could have profound implications for teaching and learning in the years ahead.

How well are our third level institutions performing? Next year we’ll find out for sure.

The Higher Education Authority is tasked with measuring the performance of colleges against agreements that set out key goals and plans. Crucially, up to 10 per cent of State funding can be withheld if they’re not met. Larger colleges and universities should be able to meet their targets, but a handful of smaller institutes of technology are likely to have real difficulty hitting theirs.

Any loss of funding would create knock-on problems for institutions, many of which say core grants are not enough to support their work.

What’s in a name? Quite a lot, based on the scramble by institutes of technology to secure the new “technological university” status.

In all, 10 of the State’s 14 institutes of technology form part of four separate groups – in Dublin, Munster, Connacht- Ulster and the southeast – that are bidding for the new designation. The enabling legislation is due to be passed soon, paving the way for mergers of DIT with institutes of technology in Tallaght and Blanchardstown next year. CIT and the Institute of Technology Tralee are likely to follow suit, creating a Munster Institute of Technology, which just happens to have the initials MIT.

It will all come at a cost, though: mergers are projected to cost about €45 million.

At a time when many EU countries are struggling with falling and ageing populations, Ireland has the opposite problem: how to keep pace with the baby boom of the past decade or so?

High birth rates will see numbers for primary school rising until 2018, after which they are forecast to reduce. Secondary school enrolments are also projected to rise until 2025, at which point numbers are set to reach more than 400,000 pupils for the first time in the history of the State.

In all, some 60,000 additional school places will be needed over the next six years to keep pace with population growth.

Any let-up in the frenetic building activity could have major repercussions for children in need of school places.

Further education and training has a major image problem.

Many students see them as a last-gasp option or another route to get into higher education. But a major overhaul of State-sponsored apprenticeships, to be rolled out in 2016, should give school leavers a positive alternative path to third-level education, as well as better meeting the needs of industry. Some 25 new apprenticeships will be available next year, including in areas such as software development and polymer processing – alongside more recognisable ones for bakers, chefs and welders.

Sustaining a world-class apprenticeship system will be crucial to enhancing the status of these roles over the coming years.

Is it acceptable that more than 90 per cent of students in Donnybrook progress to third level, compared with 15 per cent in Darndale? The stark reality in today’s Ireland is that going to college for many student can involve crossing some of the deepest ravines of the social divide.

A new national access plan for higher education is due soon. One of its aims is to boost college numbers from families without a history of third-level education, as well as mature students.

Its success will hinge on getting colleges on board and supporting them to help reach these goals.

Do you think 2016 will be a quiet year on the industrial-relations front? Think again.

Second-level teacher unions have voted to reject the Lansdowne Road agreement on public-service pay. But active opposition to the deal could cost teachers significant sums of money in lost increments, and leave unions isolated and plunged into very serious industrial disputes.

Technically, the existing Haddington Road deal runs until next June. In a confidential warning, outgoing ASTI general secretary Pat King has warned that a new government with a fresh mandate could feel confident enough to face down second-level teachers, a move that could see closures of schools next autumn in the wake of strikes or lockouts.