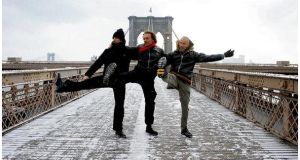 Contemporary Irish dancers Mikel Aristegui, Stephane Hisler and Matthew Morris on Brooklyn Bridge. They will be peforming Niche by Fearghus Ó Conchúir at the Baryshnikov Arts Center in New York this weekend as part of Culture Ireland's delegation of performers and promoters.

Music, dance and theatre performances at venues across city over weekend

More than 90 Irish performers and promoters have travelled to New York under the auspices of Culture Ireland. From now until Monday – and in some cases beyond – they will seek to boost their profiles with American audiences generally, and with industry figures in particular.

Culture Ireland will present four showcases – in theatre, contemporary music, traditional music and contemporary dance – at venues across the city. The mission is timed to coincide with the yearly Association of Performing Arts Presenters (Apap) conference, which bills itself as “the biggest marketplace for the performing arts in the world”.

Ó Lionáird’s one-song performance was the highlight of the city hall event. He performed Míle Buíochas to a rapt audience in the chamber. “Through all the history of city hall, all the Irish mayors and Irish politicians, I don’t think there would ever before have been music like this heard there,” Ireland’s Consul General in New York, Niall Burgess, said afterwards.

exception to an anti-Cork jibe he had delivered by way of introduction.

The singer had referred to his roots near the Cork-Kerry border, adding that the fact his home-place was “not in Cork” was “very important”. Ms Quinn, three of whose grandparents came from the Rebel County, joked: “I’m not so sure about the Cork crack.”

More seriously, Ms Quinn asserted that the arts were of unique importance in maintaining the vitality of the connection between Ireland and the US, especially at a time when Irish political concerns are lower down the American agenda than was once the case.

“The Troubles obviously bound New York to Ireland,” she said. “We want to make sure that we don’t allow the lack of an emergency to cause a decrease in the connection, because then when there is the next emergency, you’re in a much worse position.”

Similar points, albeit relating more generally to the changing US-Ireland relationship, were made by Mr Burgess and by Culture Ireland’s chief executive, Eugene Downes.

During his speech at the event, Mr Burgess included a somewhat cautionary note, stating: “We continue to make our mark but

we need to do it in a different way.”

Speaking to The Irish Times afterwards he said there was an increasing awareness at government level that Irish culture was important both as “an export product” and as a means through which more tourists could be enticed to visit the State.

Mr Downes said: “The way most Americans come into contact with Ireland is through Irish culture.” He added that the arts represented “one of the key bridges, if not the single most important bridge” between Ireland and the US.

Among the featured theatrical works in the showcases are Silver Stars, an acclaimed musical theatre collaboration between the Brokentalkers company and Seán Millar; and Little Gem, the debut play from Dublin writer Elaine Murphy, which won the Carol Tambor Award at last year’s Edinburgh Fringe Festival.

Limerick-based Daghdha Dance Company and the Dylan Quinn Dance Theatre will be among the companies represented in the contemporary dance showcase. Traditional musicians participating, in addition to Ó Lionáird, include Moya Brennan, John Spillane, and the David Munnelly Band.

“This is vital for us,” Ó Lionáird said of Culture Ireland’s mission. “We have a lot of potential to show what we can do in America. And New York itself feels like home. You don’t feel like a stranger here.”