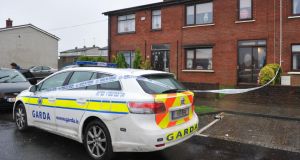 A garda car at the scene of the fatal stabbing in Drogheda’s Rathmullen Park. Photograph: Ciara Wilkinson

A woman has been charged with murder in relation to a fatal stabbing in Co Louth early yesterday morning.

Paula Farrell (40), appeared in Dublin District Court this evening following the death of Wayne McQuillan (30) at about 1.45am on New Year’s night.

Ms Farrell was remanded to appear in Dundalk District Court on January 8th next.

Mr McQuillan, of Marian Park, Drogheda, had been stabbed in Rathmullen Park in to Co Louth town.

Gardaí upgraded the investigation to a murder inquiry after considering the results of a postmortem carried out by deputy State pathologist Michael Curtis at Our Lady of Lourdes Hospital, Drogheda.

The victim was found with several stab wounds in the garden of a house in the area early yesterday. He was taken to the hospital but later pronounced dead.

The woman was later arrested and taken to Drogheda Garda station for questioning. She is being held under section 4 of the Criminal Justice Act.

In Co Kerry, gardaí are investigating a shooting on a farm in which a man was injured.

The incident took place at Kilgobnet near Beaufort at about 1.20am yesterday.

The 32-year-old victim is being treated at Kerry General Hospital in Tralee where his injuries are not thought to be life-threatening.

A 48-year-old farmer was arrested and is in custody in Killarney Garda station. It is understood the two men are known to each other and that the incident took place at the farmhouse. A legally held shotgun is also being examined.

In Co Derry, meanwhile, police investigations are continuing into an incident in which three men were attacked by a gang using baseball bats and sledgehammers.

Four masked men entered a house at Castle Park in Tobermore at about 10pm on New Year’s Eve and began assaulting the three men.

One of them, a 20-year-old, has been treated in hospital for arm and leg injuries while the others are reported not to be badly hurt.