Widow of man killed at Loughgall can challenge inquest decision 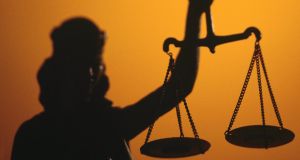 The widow of a civilian shot dead along with eight IRA men can challenge the Northern Ireland secretary’s intervention on whether to order fresh inquests into their deaths, a High Court judge has ruled. Photograph: Getty Images.

The widow of a civilian shot dead along with eight IRA men in 1987 can challenge the Northern Ireland secretary’s intervention on whether to order fresh inquests into their deaths, a High Court judge has ruled.

“This is a case which raises issues on the grounds that remain...of considerable complexity, general importance and potentially profound implications,” Mr Justice Treacy said.

Mrs Hughes’ husband Anthony died in May 1987 when he was innocently caught up in what proved to be the largest loss of life suffered by the republican movement during the Troubles.

Last year Mr Hughes’ family received a full government apology, confirming he was entirely innocent of any wrongdoing. Northern Ireland Attorney General John Larkin QC had been considering requests for new inquests after the European Court of Human Rights in Strasbourg found the rights of those killed at Loughgall had been violated.

But last September Ms Villiers issued a certificate for Mr Wright, who is also Attorney General for England and Wales, to decide on whether to direct a fresh tribunal into the ambush. Some of the material in the case was said to be “national security sensitive”.

Lawyers for Mrs Hughes took legal action against the move, arguing that the British Government should have no role. She believes authorities in London “played a significant part” in events that ultimately led to his death, the court heard.

Her barrister said there is still significant dispute about whether the security services could have taken alternative action at Loughgall and over an alleged shoot-to-kill policy in operation at the time. It was claimed that under devolution the Northern Ireland Attorney does have authority to deal with matters of national security.

Ruling on the first stage of the case on Thursday, Mr Justice Treacy held that an arguable case had been established that the Secretary of State’s decision to issue a certificate was contrary to requirements within the European Convention on Human Rights.

He also granted leave to seek a judicial review on a further ground dealing with the compatibility of coroner’s legislation with the 1998 Northern Ireland Act. Listing the case for a full hearing in May, the judge added: “The applicant has demonstrated at least two of her grounds are arguable and will require in-depth examination at the substantive hearing.”