The man who knows how to make a citizen’s arrest 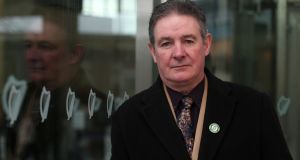 Stephen Manning was sentenced to two months in jail last week. However, he was not in Castlebar District Court to hear the judge’s ruling on a charge of breaching the peace in the town’s courthouse last year. Instead, he was in Dublin, trying to hand in a petition to the Supreme Court.

Manning continues to deny the Castlebar charge and says he was never told he was due in court. He is now on bail pending an appeal. “It’s scary, it’s very scary,” he says.

Manning, a retired teacher, has been in many courts. In the beginning, he was there with other members of his group, Integrity Ireland, to protest against home repossessions in Mayo.

More recently, however, he has begun to use an obscure legal provision dating from Victorian times which allows private citizens to criminally prosecute those they believe have broken the law.

Under the 1851 Petty Sessions Act a person can ask a judge to issue a summons for a suspected lawbreaker. A garda or lawyer is not required. The standard of evidence necessary for issuing a summons is quite low.

The private prosecutor can take a case to its end, one that could involve jail for a person found guilty. If the allegations are serious, the Director of Public Prosecutions will take over and has the option of proceeding with the case, or dropping it.

He started trying to bring his own prosecutions, he says, because “there was so much wrongdoing going on by agents and agencies of the State”. So far, he has taken actions against gardaí, court staff and judges.

Despite making initial headway in some cases, he has yet to succeed in convicting anyone. Failure, however, proves to his eyes that he is right about the system, not that he was wrong to take the actions.

“Clearly the decisions are made from on high that ‘we do not let our guys get prosecuted because if the public gets to hear they can do this, we’re finished’”.

Last year, Manning was an unsuccessful candidate in the general election, running in Mayo. He got 157 first preference votes.

He has published a book, DIY Justice in Ireland – Prosecuting by Common Informer which is subtitled: “The quick and easy (lawful) way to take on tricksters, tyrants, thugs and thieves in the Irish Justice System.”

Besides offering guidance on private prosecution and citizens’ arrests, it lambasts the Courts Service as a private corporation whose objective is to “turn a profit” and accuses the legal profession of being “rife” with malpractice, fraud, perjury and deception.

“I know I must sound like a conspiracy nut, and I used to think like that when I heard people talking like this, but it is my honest opinion that we have a very seriously corrupt justice system,” he said.