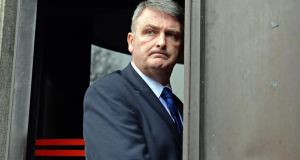 Mr Callinan last night accused GSOC of implying there was Garda complicity in the suspected bugging.

The commissioner’s intervention followed a statement from GSOC in which the Garda watchdog expressed regret at its failure to inform the Garda and the Department of Justice about the matter.

“I have read very carefully the contents of the Garda Síochána Ombudsman Commission’s statement this evening and note in particular the assertion that there was no evidence of Garda misconduct,” said Mr Callinan.

“It is a cause of grave concern that the Garda Síochána Ombudsman Commission’s statement contains a clear indication that An Garda Síochána was in some way suspected of complicity in this matter, despite GSOC’s overall finding that the existence of technical and electronic anomalies could not be conclusively explained.”

Basis for suspicion
He added that he was seeking clarification from GSOC on the nature and extent of the anomalies identified by a UK security consultancy; whether these anomalies amounted to a security breach; whether a criminal offence is suspected; and the basis for the suspicion of Garda misconduct.

Mr Callinan asked whether any matters required investigation by the Garda.

Senior officers at Garda Headquarters, Phoenix Park, last night said the suggestion by GSOC that the Garda force had been suspected of the bugging would have a “devastating” impact on their already troubled relationship.

“It’s difficult to see how the relationship is workable after this. It’s pretty incredible really,” said one source.

Others believed the position of GSOC chairman Simon O’Brien was untenable: “Mentioning the gardaí as a suspect for this was a big, big surprise.”

Earlier, GSOC expressed regret at its failure to inform the Department of Justice and the Garda about the suspected bugging of its headquarters. It followed a meeting between the GSOC chairman and Minister for Justice Alan Shatter.

The commission said it had consulted security experts twice since the body started its work in 2007.

“A security sweep of GSOC’s offices was conducted on the evenings of September 23rd- 27th, 2013. This was conducted by a specialist UK security firm that had been recommended,” said the statement.

Cost of checks
The cost of the security checks was just under €18,000.

“The investigation was completed on December 17th, 2013. It confirmed the existence of three technical and electronic anomalies. These could not be conclusively explained and raised concerns among the investigation team in terms of the integrity of GSOC’s communications security.

“However, GSOC is satisfied that its databases were not compromised. Since the investigation concluded, we have been working to review and enhance our security systems in the light of what the investigation revealed. There was no evidence of Garda misconduct.”

It also said it did not report the matter to other parties because it “did not wish to point fingers unnecessarily and we did not believe that widespread reporting would be conducive to public confidence”. GSOC now regretted this decision, its statement added.

Mr Shatter will report to the Cabinet this morning and the issue may be raised afterwards in the Dáil.

1 Covid-19: Cases increasingly occurring among young people, officials say
2 Mother and five children sleeping in car while seeking accommodation
3 Depp may have severed own finger, according to email to doctor, court told
4 Donald Trump is an amateur populist – the real trouble is yet to come
5 Ex-Fianna Fáil TD apologises to Mary Lou McDonald over ‘damaging’ tweet
Real news has value SUBSCRIBE