Untangling the threads of the Supreme Court’s thinking

A decade after the landmark Sinnott judgment, the notion of ‘judicial activism’ still stirs debate 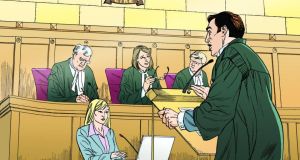 It was late October 2000, and opinion was split around the cabinet table. In a landmark ruling a few weeks previously, the High Court had decided that the State’s constitutional obligation to provide free primary education was based on need, not age. The decision came in a case taken by Jamie Sinnott, a 23-year-old autistic man who argued that his right to education didn’t end at the age of 18. The media had given extensive coverage to his legal battle with the State.

With the deadline for lodging an appeal at the Supreme Court looming, the Fianna Fáil-PD government had to make a decision. Some ministers argued against pursuing the case. They were uneasy about extending a confrontation with a profoundly mentally disabled man and feared a backlash from the public. Already, in anticipation of an appeal being lodged, the opposition had ratcheted up its attacks over the Sinnott case.

In the Dáil after the judgment, taoiseach Bertie Ahern had appeared to accept it ruefully, telling the chamber the Sinnott case was “over”.

Yet others in government were convinced they had to appeal. The Sinnott v Minister for Education judgment had huge implications that went beyond this very sad situation, they argued. It might mean that people who had no recognised physical or mental disabilities but who were, for example, functionally illiterate, could claim the right to free primary education.

More significantly, they believed, the judiciary, by in effect ordering the government to spend taxpayers’ money a certain way, had crossed a “red line” into the executive’s domain, and it set a dangerous precedent.

“Suddenly the thing was in sharp focus,” says one source with knowledge of government deliberations, referring to relations between the executive and the judiciary.

The government decided to take the appeal and cover all Sinnott’s legal costs. Eight months later, the Supreme Court – sitting as a seven-judge court for the first time – overturned the High Court decision by a five-to-two majority and said the right to primary education ended at age 18.

Exasperated
The battle of wills wasn’t quite over. Just a few months after the Sinnott case, in TD v Minister for Education, Judge Peter Kelly of the High Court, exasperated at the lack of secure accommodation for vulnerable children coming before him, directed the State to build and open a number of high-support units for children at risk, as it had pledged to do. Again the cabinet conferred; again it decided to appeal.

“That was a key period,” recalls a source. “Did it mean we could be told to start building schools or hospitals?” The Supreme Court, this time by a four-to-one majority (Susan Denham, now the Chief Justice, dissented) overturned the High Court’s decision.

Together, these two test cases are seen as representing key moments in a debate taking place inside and outside the court over how far the judiciary can go to protect the implied socio-economic rights of marginalised individuals and groups. More broadly, they feed into a wider argument over judicial activism. The views of some current judges on this are clear. In a trenchant speech that recalled those 2001 cases some years later, Judge Adrian Hardiman argued that the views of supporters of judicial activism are “characterised by a deep distrust of the democratic political process, and by an authoritarian tinge”.

In a similar vein, Prof David Gwynn Morgan of UCC has warned of the dangers of an overactive judiciary, arguing that while judges’ strong instincts for fairness has led to a number of decisions protecting groups likely to be disadvantaged, there have been other areas in which judicial activism “has taken the form of the judiciary imposing basic policy values in preference to those chosen by the elected organs of government”.

According to Prof Donncha O’Connell of NUI Galway, however, the Supreme Court’s stance on socio-economic rights is driven by a “very rigid” view of the separation of powers in the Constitution – a topic on which the Constitution is “laconic”.

“You could argue that the Constitution is also a value system, that it isn’t just a set of codified rights,” Prof O’Connell says, adding that what is required is “at least some consciousness of what you might call socio-economic justice on the part of those who are interpreting it”.

Would it not be of concern to have unelected judges overriding politicians’ decisions? “The fact that judges are not elected is always a concern, but in making those decisions they’re not necessarily making political decisions,” Prof O’Connell replies. “They’re saying, for example, that there’s a bottom line of constitutional justice that must be met by the political branch. They don’t have to prescribe how it is met.”

While some see the judgments in the 2001 cases as having shut down the debate on socio-economic rights and judicial activism more widely, some more recent decisions suggest subtle shifts.

In 2004, it emerged that, over a period of 30 years, the State had unlawfully charged medical card-holders for the cost of their stay in nursing homes. When the issue came to light, the government passed a Bill to make this unlawful practice lawful. When president Mary McAleese referred the Bill – the Health (Amendment) Bill 2004 – to the Supreme Court, the judges found parts of it unconstitutional and told the State to pay the money back.

If the court had wanted to stick to the same logic as in TD v Minister for Education, it was open to it to allow the nursing homes Bill on the ground that no implied constitutional right to care and maintenance by the State existed (counsel challenging the Bill had said there was such a right, derived from the constitutional rights to life and bodily integrity). Significantly, as Prof Gerard Whyte of Trinity College Dublin points out, the court did not take this course of action. Indeed, its strongly worded judgment held open the possibility that citizens might enjoy such an implied socio-economic right.

“It is possible that what is emerging here are the inchoate elements of a judicial policy that would review legislative and executive decisions in relation to fiscal matters, including socio-economic rights, only where there was evidence of bad faith,” writes Prof Gerard Whyte. Believers in an expansionist Supreme Court long for the spirit of the 1960s, when judges such as Brian Walsh and Cearbhall Ó Dálaigh were behind a series of landmark judgments on unenumerated, or implied, rights. Supreme Court judges bristle at claims that they show undue deference to the executive.

Taking on this claim in 2004, Judge Hardiman pointed to a series of recent cases that had gone against the State, including the Abbeylara judgment on Oireachtas inquiries. “We’re living in a very complex society where not even our government is able to say, ‘this is how it’s going to be’, because there’s the EU, the troika and everything else. It’s not as if you’re dealing with blue ocean everywhere, as the Ó Dálaigh court was,” says one superior court judge.

Inconvenient
In Judge Denham’s time as Chief Justice, the court has delivered a number of judgments that were inconvenient for, and often sharply critical of, the State. Last December, the court ruled that the Government had breached the McKenna principles by spending public money on a one-sided information campaign for the children’s rights referendum (in her judgment, Denham gently endorsed the idea of a permanent electoral commission).

Last October, in finding unanimously that the High Court had wrongly refused injunctions blocking the deportation of a Nigerian mother and her Irish-born son, the court pointed to flaws in the “extremely complicated” asylum laws, which were contributing significantly to delays in the process. In effect, the court was nudging the Government to hurry up and enact an immigration Bill that has been sitting on a desk in the Department of Justice for four years. The court can also be an assertive voice for the individual where it feels State authorities – notably gardaí – have erred. In Damache v DPP in 2011, the court ruled that a key section in the Offences Against the State Act was unconstitutional because it permitted a search of a person’s home on foot of a warrant not issued by a person independent of the investigation.

The judgment led to the quashing of the convictions of three men jailed for their part in a so-called “tiger kidnapping”. “That to me was one of the worst decisions they ever made,” says one lawyer.

It also left the gardaí furious.

Notwithstanding decisions such as these, some influential voices believe the court has, over the decades, shown too much deference to the State. One of its retired members, Catherine McGuinness, feels there is room to expand the nature of judicial review, which she feels has been used quite conservatively. In a country where the legislature is so weak compared to the executive, she says, “it’s important that the judicial arm should not be overly reverential when it comes to looking at the interaction of individuals and the State”.