Olympic ticketing case: Pat Hickey and Kevin Mallon due in court in Brazil next month 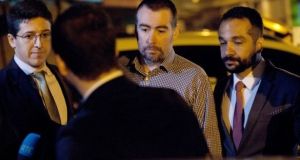 Kevin Mallon after his release from Bangu 10 jail in Rio de Janeiro.

A Rio de Janeiro judge has dismissed an action brought by Kevin Mallon’s lawyers, alleging irregularities in the legal handling of the ongoing Olympic ticketing case.

Lawyers for the Dublin man arrested on the eve of the Olympic Games in a hotel in Brazil last August, who would later share a prison cell in Bangu jail with former Olympic Council of Ireland president Pat Hickey, had brought a habeas corpus claim to the local courts, claiming illegalities in how the case was being conducted locally.

Sao Paulo-based solicitor Franklin Gomes brought a case against the Special Court for Supporters and Large Events, which had jurisdiction during the international sporting event last year, when the two Irish men were arrested, alleging “illegal duress”. He said evidence had not been produced against his client, and, therefore Mr Mallon’s capacity to be defended was compromised.

However, judge Fernando Antonio de Almeida, from the Rio de Janeiro Sixth Criminal Court, dismissed the action in a decision earlier this month, suggesting lawyers were not using the correct mode to assert such accusations.

In his published statement, the judge said: “habeas corpus is not a tool to be substituted for one’s own resource to combat the decision to deny the production of proof to the individuals defence.”

Dismissing the habeas corpus case, the judge said not only had he not seen “the existence of any illegal duress to be remedied, seeing as the original process is following its regular protocol”, but also that habeas corpus was not the appropriate means to channel such accusations, recommending Mr Mallon’s legal team “use the formal instrument to review the denial of production of evidence alleged.”

Neither Mr Mallon nor Mr Hickey’s Brazil-based lawyers were available for comment on Tuesday. Both men are due to appear in a Rio de Janeiro court on November 29th at 2pm local time. A final decision on the case is not expected before February 2018.