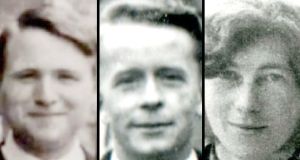 Robin Bell (left) a UDR member was shot in an IRA ambush in 1972. The next day Catholic farmers, Michael Naan and Andrew Murray, were stabbed to death by members of the British army.

Early one Sunday morning in 1972, Robin Bell set off for the family farm a few miles up the road in Newtownbutler, Co Fermanagh with his father Sidney and brother Richard.

The three Protestant men intended to to milk their cows before heading off to Galloon Parish Church, as they did every week.

But the moment they arrived in the yard, not far from the Co Monaghan border, they were shot at by three IRA gunmen hiding on the other side of the road.

Robin, a member of the Ulster Defence Regiment, was sitting in the passenger side of his father’s car when he was gunned down. Richard, also a member of the infantry regiment of the British Army, returned fire but it had little impact.

“Robin got the initial burst in the passenger’s side of the car. When I realised what had happened I shouted ‘get down’. I had a pistol, but it only made a noise,” recalled Richard.

He and his father were not hurt, but, as the gunmen made off, leaving 30 bullet holes in the side of the car, his older brother died from his injuries. Private John Robert (Robin) Bell was 21 years old and was buried with full military honours.

All three murders – which occurred 44 years ago this week – prompted fear, anxiety and mistrust within the community.

Locals thought they were connected and that Naan and Murray died as a result of a revenge attack following Bell’s murder.

However, years later, it emerged there was no connection at all.

Four decades later, the pain for Richard Bell and his family continues. Now 64, he admits the memories are never far away. “I feel like a silent sufferer now, but you have to get on with it. It never leaves you, it never leaves you. There is not a day that goes by when I don’t miss him.”

He still doesn’t know who was responsible for his brother’s murder. “There has been no justice for the family and you feel that possibly there never will be. I am not holding my breath that I’ll ever see justice.”

Michael Naan, a prominent member of the Civil Rights Association, was a father figure to his 17-year-old nephew James, after the young man lost his father Enda. In what was described at the time as an act of savagery, Michael was stabbed at least 17 times in the chest while Andrew Murray suffered at least 13 stab wounds.

“They thought my uncle was a quartermaster in the IRA, which the IRA later denied. He was never a member of the IRA,” said his nephew.

Knowing who carried out the murders of the two men, he provided information to the police and, in January 1981, a staff sergeant and a sergeant of the 1st Battalion Argyll and Sutherland Highlanders were tried and jailed for life for the murder of the two farm workers. Two other soldiers also pleaded guilty to lesser roles in the murders.

As with the Bell family, the grief of Michael Naan’s nephew is as evident today as it was then. “I feel more raw, more sore now than I did 40 years ago. I feel sorry for all families of victims, families who don’t know why their loved one was targeted back then.”

– James Naan and Richard Bell will tell their stories in As Radharc na Súl/Out of Sight, Out of Mind, a documentary by Dearcán Media on how three murders over two days in 1972 left a border community feeling frightened and vulnerable. The documentary will be broadcast on TG4 on Tuesday October 25th at 9.30pm.