The meetings not noted, the questions unasked 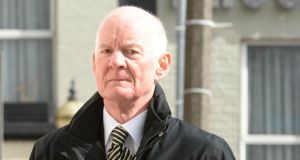 On Thursday, March 13th, last, Patrick Neary, the former financial regulator, gave evidence at the Anglo trial about a meeting he had with David Drumm, then chief executive of Anglo Irish Bank on September 12th, 2007.

The meeting occurred on the day after Drumm and Seán FitzPatrick (then chairman of Anglo Irish Bank) had heard from the businessman Seán Quinn that Quinn had amassed, indirectly through contracts for difference (CFDs), a 24 per cent shareholding in the bank, a situation that imperilled the viability of the bank and the Irish financial system as a whole. Arising from that revelation, the Anglo board, according to a number of its members, directed Drumm to meet and inform the regulator of the precarious situation that had transpired. There were two meetings with Neary – on September 12th and September 27th.

Asked if he kept notes of meetings in the normal course of his business, he said he did but in this case Drumm had asked could he drop in to see him as there was something he wanted to discuss privately. It was “a special meeting of a personal nature that was [what was] conveyed to me before [Drumm] came in”.

Q: “Well I would regard personal nature like I’m having problems at home or where I’m going on holiday. I take it we’re not talking about that?”

A: “Well it allowed for that possibility.”

A: “Yes it did because I had no idea what kind of an issue a chief executive of a financial institution might come and raise with me .”

Q: “Well, could it have something to do with finance – rather than trouble at home ?”

A: “Oh, it could be to do with anything, but I got the impression that – from Mr Drumm – that this was very much an informal chat he wanted to have with me .”

Also in his evidence on Thursday, March 13th, last, he said Drumm expressed concern at that meeting about rumours “about possible holding of CFD positions against shares in the bank . . . That Mr Quinn may have held up to 10 per cent of the shares in the bank by way of CFDs”.


Worried
He said Drumm was “worried that perhaps the CFD holdings by Mr Quinn was even bigger than that but he had no way of finding out and he wanted to see what information, if any, that the authority had or was there any way we could find out”. He insisted Drumm did not inform him that Quinn’s CFDs position amounted to 24 per cent.

Neary had a meeting with Quinn subsequently, in January 2008. He was asked:

A: “I came about it in a way that there’s talk you may have some CFD positions, and he responded that he had CFD positions in Ryanair and in Anglo but they weren’t very large and he didn’t intend to hold them . . . Mr Quinn is entitled to, as a private citizen, to have all the investments he wanted to have and I respect that and I didn’t feel that it would be fair or appropriate for me to tackle a person about his own personal investment portfolio.”

Neary also gave evidence about his office’s supervision of how Anglo was dealing with the crisis caused by Quinn’s CFDs, a crisis that he acknowledged in his evidence was a threat to the entire financial system.


No records
He was asked by defence senior counsel Brendan Grehan if he had kept any records of information he was receiving from the second-in-command in his office, Con Horan ( then prudential director at the regulator’s office.

A: “No memo, no record whatsoever.”

Q: “Something for the file?”

A: “No record whatsoever. I believed Mr Horan would give details of what was going on for the file and would maintain the records .”

Q: “Well the strange thing , maybe just a coincidence, is that Mr Horan, it would appear, didn’t make any record or doesn’t have any record, save for a note he prepared . . . in advance of the [regulatory ] authority meeting of 23rd of July . He thinks he prepared it perhaps a day or so before that.”