Opinion: It is through gangland culture that many men find a status otherwise denied to them 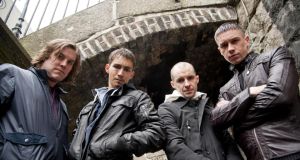 The ending was flat and confusing on Sunday night, some of the storyline seemed undeveloped and there was a sense nobody knew where the series was going. But Love/Hate was magnificently written, shot, directed, produced, edited and acted, for which Stuart Carolan, David Caffrey, Dermot Diskin, Tom Vaughan-Lawlor, Peter Coonan, Charlie Murphy, Aoibhinn McGinnity and Killian Scott and all others involved deserve great credit. RTÉ, the impecunious station that commissioned the series and paid spectacularly for it, also deserves credit, albeit with some reservations, mainly to do with the politics of Love/Hate and the politics of RTÉ and of much of the media in reporting, commenting and portraying criminality.

‘Scumbags’
The series underscored the sense that criminality, in the main, is associated with an assortment of “scumbags” (in the airhead lingo of some crime journalism), “scumbags” emerging from communities that have no care for the welfare of children, for education, for the rudiments of decent living, for normal civilised behaviour. At times, it is conceded, these “scumbags” may be charming, even charismatic, but they embody a violent gene, bringing fear not just to their victims but also to society in general and in particular to the societies in which they operate. It is implied that they deserve to spend their lives behind bars, irrespective of the niceties of the legal system.

There is hardly any reflection in RTÉ, TV3 or elsewhere in the media that the kind of criminality depicted in Love/Hate derives in large part from the dysfunctional society we have allowed to evolve, where there are deep inequalities not just of income, wealth, power, influence, health, education and longevity but of respect and self-worth.

In Understanding Limerick: Social Exclusion and Change by Niamh Hourigan, she writes of men who get caught up in criminality: “Economically excluded, culturally stigmatised and insecure in their position as fathers and partners, these men have no legitimate source of pride or esteem available to them. Yet their need to achieve status, to be admired and respected, is the same as everyone else’s. As results they have created a different system of status. This status is linked to being a ‘hard man’ who embodies toughness and capacity for violence, as a figure who then elicits fear in his more vulnerable neighbours.”

Niamh Hourigan goes on to quote the sociologist Richard Sennett as claiming how lack of respect is one of the most significant “hidden injuries of class”.

Gangland culture is founded on both fear and status. It is through the gangs that many men find status and respect otherwise denied to them by society and it is a combination of fear and a desire for status that draws teenagers and young men to gangs and criminality.

Niamh Hourigan writes: “For a child who is growing up in an area where the ‘disadvantaged of the disadvantaged’ are clustered, the likelihood of embracing the fear-based respect model is much greater. Evidence of the ‘hard man’ culture will be visible daily on the streets, even in the posturing and street language of young children”.

The injury of inequality is brilliantly portrayed in the seminal work The Spirit Level: Why Equality is Better for Everyone by Richard Wilkinson and Kate Pickett. They show child wellbeing is better in more equal societies; there is less hard drug abuse in more equal societies; children do better academically; there are fewer teenage pregnancies; and there is less crime, imprisonment, status competition, individualism and consumerism.

There is a further point that emerges from Love/Hate: the “war” on drugs. This “war” has done far more damage than the drugs themselves, although of course the drugs too have done terrible harm.

More lives have been devastated by the criminalisation of hard drugs than by the drugs themselves. We could at least have greatly minimised the harm caused both by drugs and the “war” on drugs by ending the “war” and treating the harm of drugs, through health care and, more significantly, through more equality.

But it won’t happen. Nidge and his likes will be in business for a long, long time.