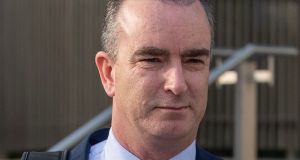 Det Insp Mark O’Neill told the court there was a dispute between the boys as to whose idea it was to meet Ana Kriégel on the night of her murder. Photograph: Collins Courts

Gardaí found evidence that Boy A and Boy B planned the murder of Ana Kriégel (14) in Leixlip in May 2018, a court has heard.

Senior Investigating Officer, Det Insp Mark O’Neill, told a sentencing hearing on Tuesday there are a number of factors which suggest planning went into the murder.

Det Insp O’Neill told prosecuting counsel Brendan Grehan SC that the boys, known publicly as Boy A and Boy B, planned a location to meet and that they were both seen on CCTV wearing backpacks.

Following the murder they both had “a somewhat similar story to suggest Boy A had met Ana because of some kind of relationship issue but Boy A had turned Ana down and she had left”.

Det Insp O’Neill said there was no contact between the boys between Ana’s murder and the time they gave statements to gardaí in which they gave false accounts that were “in general terms quite similar”.

Det Insp O’Neill further agreed that since conviction, Boy B had maintained the position that he had no part in what happened. He said there remains no agreement between the two boys in relation to the planning and pre-meditation of the murder.

He said there is a dispute as to whose idea it was to meet Ana, who decided that Boy B should call to her home, who decided they should meet at Glenwood House, who brought what to the house – in particular a piece of insulation tape that was found wrapped around her neck.

Det Insp O’Neill said neither boy or their parents had come to Garda attention prior to Ana’s murder. He added: “There doesn’t appear to be any clear explanation as to why this happened.”

Both boys will be sentenced next Tuesday at the Central Criminal Court.

The two boys were 13 when they murdered Ana in Glenwood House at Laraghcon, Clonee Road, Lucan on May 14th, 2018. They were convicted by unanimous jury verdicts in June following a seven-week trial. Boy A was also convicted of Ana’s aggravated sexual assault in a manner that involved serious violence.

The trial heard gardaí gathered what Mr Grehan described as “overwhelming” evidence against Boy A. It included CCTV footage contradicting his version of events, forensic evidence linking him to the scene and to Ana’s body, phone internet searches for “abandoned places in Lucan” and circumstantial evidence including the injuries he presented with on the evening of May 14th which he claimed were the result of a random assault by two men in the park.

Semen matching Boy A’s DNA was found on Ana’s top at the scene and his DNA was on her neck and on both ends of a long piece of insulating tape that was wrapped around her neck. Her blood was found on his boots and on a backpack, a homemade “zombie” mask, knee pads and gloves which gardaí found in a wardrobe in his bedroom. The blood spatter pattern on his boots showed, according to forensic scientist John Hoade, that he either assaulted Ana or was in close proximity to her when she was assaulted.

Mr Hoade described the mask that the prosecution said Boy A was wearing during the assault as a “half mask” with “jagged teeth” and “simulated blood” around the mouth.

Gardaí called the contents of the bag a “murder kit” and Mr Grehan said the blood showed that Boy A was wearing the mask, shin guards, knee pads, a hoodie and boots when he assaulted Ana.

The evidence against Boy B was largely gleaned from what he said in his many Garda interviews. Mr Grehan said he told a mixture of “lies, untruths and half-truths”. During those interviews Boy B initially told gardaí he brought Ana to meet Boy A at a particular point in the park and then went home. When CCTV contradicted this version he said the meeting point was in a different area of the park, closer to the abandoned house.

Over the course of five interviews on May 24th and 25th he finally admitted to being in the abandoned house where he said he saw Boy A assault Ana but ran away when Boy A started taking off her bra.

He was rearrested on July 7th after DNA evidence suggested that Boy A had been wearing the mask and other items during the assault.

During that second round of interviews Boy B told gardaí that Boy A had told him about one month before Ana’s death that he wanted to kill her. He said he was sitting by himself when Boy A came over and asked if he wanted to kill somebody. Boy B said: “I said, no. He replied: ‘Ah here, why not?’ I said because it’s retarded and he was like, ‘oh, come on’. I then asked who he was planning to kill and he replied, ‘Ana Kriégel’. I replied with, ‘in your dreams’, and he just left. I didn’t think he was being serious.”

Mr Grehan said Boy B “lured” Ana to her death and added: “Any suggestion that he assisted in this matter without the knowledge of what was to happen is not credible.”