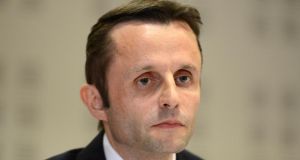 Geoffrey Shannon said it was not necessarily the case that the State would be held accountable for all abuse cases.

Dr Geoffrey Shannon said the judgment on Tuesday was complex and that the Government should now consider establishing a working group to assess its options before issuing any response.

The European Court of Human Rights ruled that in the case of Louise O’Keeffe, who was abused in primary school in the 1970s, the State had failed to meet its obligation to protect her. Ms O’Keeffe had brought a failed action to the High Court and in 2009 the Supreme Court also ruled against her, finding the State could not be held liable for the abuse she suffered.

Abuse cases
Dr Shannon said it was not necessarily the case that the State would be held accountable for all abuse cases on foot of the ruling but consideration of what action the Government should take was essential, particularly given that an estimated 130 similar cases were withdrawn following Ms O’Keeffe’s failed Supreme Court challenge.

“One size fits all isn’t something that exists here,” he said.

In terms of potential redress, he said the State must now decide whether it felt it should be limited to the 130 previous cases, now withdrawn, or if it has a potentially wider application.

“In terms of expense in the long run, if you look at it in pure monetary terms it is a balancing act that now needs to be taken into account,” he said.

Whatever the outcome in terms of further legal action, Dr Shannon said what was certain is that the ruling has raised the bar in terms of the expected protective measures. It would also redraw the lines in the relationship between school patrons, boards of management and the Department of Education, in that the latter could no longer delegate liability. “The implications are risk assessment in all areas and where risk emerges, limiting or eliminating risk, [the State] needs to be far more vigilant. This is significant in legal terms,” he said.

‘Hear no evil’
“If you plead that you were not aware of the abuse, the question is should you have made yourself aware? ‘Hear no evil, see no evil’ seems to be the case that we have taken in the past and now the European Court of Human Rights has said that that can no longer be the case.”

Dr Shannon said a central piece of evidence, the Ryan report, showed through historical record that it could not have been the case that the State was not aware of risk.