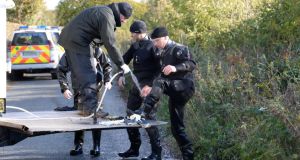 A human skull has been found close to where dismembered parts of a murdered drug dealer were dumped.

It is suspected the skull discovered by gardaí in Clonee, Co Meath, belongs to 37-year-old Christopher Gaffney.

Other body parts were found in the same rural area last month.

Those remains were identified as those of Gaffney, from Blanchardstown, by matching fingerprints on the Garda database.

It is believed the victim was heavily involved with criminality. He was well known to gardaí, with a string of drug-related offences under his belt.

He was reported missing by his family in October.

Detectives believe the victim suffered a gruesome death before his body was chopped up and dumped.

The latest find was made by gardaí late yesterday.

A Garda spokesman said: “Gardaí investigating in relation to the discovery of human remains in November have discovered a further body part yesterday evening in Clonee.”

The skull has been removed to Connolly Hospital in Blanchardstown for tests.

A formal identification is not expected until DNA analysis has been completed.