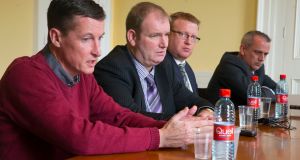 Six men sexually abused as boys by a former sports coach in Waterford in the 1980s have begun a civil action against the State for failing to protect them after they allege various State agencies were made aware of the abuse.

The men were among 10 complainants who saw their abuser Bill Kenneally (66) of Laragh, Summerville Avenue, Waterford, sentenced to 14 years in jail last February.

The Garda investigation which led to Kenneally’s conviction started in 2012 when one of Kenneally’s victims, Jason Clancy (45) from Waterford, contacted gardaí after discovering that Kenneally was still involved in coaching basketball with a club in Waterford.

Yesterday, Mr Clancy confirmed he was one of the six men who have initiated legal action against the State over the abuse which they suffered from at the hands of Kenneally at his home in Waterford and other locations in the south east in the 1980s.

“We are also seeking a sworn commission of inquiry from Minister [for Justice] Frances Fitzgerald because we believe that people in various agencies of the State, the gardaí and the HSE have a lot of questions to answer and we want to know could some victims have been saved from abuse if they had acted.

“The reason we have included the HSE is because at the time two of the victims were actually getting counselling from the health board and yet others were still being abused by Kenneally at the same time. They did nothing and failed to protect us,” he said.

Trying to get answers

But Mr Clancy stressed that the civil action, which is being handled by Belfast firm KRW Law, is not motivated out a desire to get financial compensation, but rather as means of trying to get answers to how the abuse was permitted happen.

“This is absolutely not about money. The reason we are taking a civil action is to get to the bottom of this once and for all and get answers and find out who knew what about Bill Kenneally abusing boys and when they first found out about him doing it,” he said.

During Kenneally’s trial, his defence counsel, Michael Counihan told Waterford Circuit Criminal Court that Kenneally had made gardaí aware in 2012 that he had met gardaí in 1987 after the family of another boy contacted them to say that he may have abused their son.

Mr Counihan said the meeting with Kenneally had been arranged through his uncle, the late former Fianna Fáil TD and mayor of Waterford, Billy Kenneally and involved him meeting with Supt Sean Cashman and Insp PJ Hayes for 90 minutes.