Service for victims of domestic abuse sees 30% rise in clients

Applications for domestic violence orders up 6% last year to more than 15,000 cases 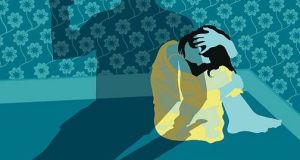 In the first quarter of 2017 the domestic violence support service recorded 133 visits from women, compared to 103 visits for the same time last year. Graphic: Getty Images

The country’s leading in-courthouse support service for women who have experienced domestic abuse has seen an increase in clients of more than 30 per cent so far this year.

And there has been a growth in the number of domestic violence orders applied for nationally, up 6 per cent last year to more than 15,000 cases, according to Courts Service figures.

The Dolphin House Family Law Court Support and Referral Service operates out of the same building as the Dublin District Family Court, the busiest family court in the country.

In the first quarter of 2017 the support service recorded 133 visits from women, compared to 103 visits for the same time last year. Client numbers were up from 91 to 125.

Gill Kennedy, a support worker at the service, said the increase was not necessarily attributable to an increase in violence against women but women were more aware of the service and were accessing the courts more.

This was partly due to advertising campaigns about domestic abuse and high profile cases such as that of the Hawe family last year. In August 2016, Alan Hawe killed his wife Clodagh and their three young boys before killing himself.

“Women would come in then and they would be really scared and saying, ‘what if he did this or that to me? I don’t know, he might’.”

Margaret Martin, director of Women’s Aid, said issues feeding into an overall increase in referrals include the EU Victim’s Directive, transposed into Irish law in 2015, and with that the Garda victim service offices.

“You have more signposting for victims at the moment, and that may be feeding into a heightened awareness of the whole issue of domestic violence,” Ms Martin says.

There was also an extension in eligibility for domestic violence orders in recent years to cover same-sex couples and couples with a child in common.

“There is probably an increased level of awareness of the issue and that it’s a crime, and people are looking for solutions,” Ms Martin said.

Women from all backgrounds attended the support service, many of whom were middle class with partners or spouses working in areas including the law, politics and the Garda.