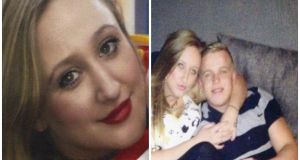 Gardaí continue to search for a missing mother and baby although a national newspaper claims to have spoken to the woman who says they are “safe and well”.

Detectives at Castlerea Garda station in Co Roscommon said they are “concerned for the welfare” of Paige Holland (23), also known as Abbie Goodier or Paige Goodier, and her one-week-old daughter, Nevaeh Goodier/Tighe.

They were last seen leaving their home at Westview, Cloonfad, Co Roscommon, on January 15th.

Ms Holland spoke to the the Irish Sun newspaper on Friday about the nationwide search for her and her daughter.

“I feel like a fugitive but the only thing I am guilty of is of being a good mother,” she said.

“I can’t believe this appeal has been issued and our pictures have been plastered all over the media.

“My baby is safe, is breastfeeding and I am bonding with her. She’s also warm, comfortable and receiving love just like any other child.”

Nevaeh, her daughter, was born on January 13th. Both are believed to be travelling with Ms Holland’s partner, Aaron Tighe (22), also known as Aaron Chadwick or Ian Smith.

“I believe this concern is originating from social services in the UK but my child isn’t in any danger. I was also worried about social services here taking my daughter,” Ms Holland said.

Ms Holland, who was born in the UK and moved to Ireland last November, told the newspaper she would notify the gardaí of her whereabouts if she received assurances she would stay with her child.

“I’m willing to work with them and will even go to a mother-and-baby unit if they want to assess me. I just want to be with my daughter,” she said.

Gardaí renewed appeals to find the pair on Thursday and urged anyone with information to contact Castlerea Garda station on 094 9621630, the Garda confidential line on 1800 666111 or any Garda station.