Police clear locations due to hold information sessions in Belfast, Omagh and Derry 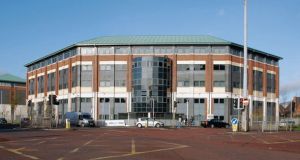 Police in the North have been dealing with a series of security alerts at venues in Belfast, Omagh and Derry that are due to host PSNI recruitment information sessions.

The Waterfoot Hotel in Derry, the Strule Arts Centre in Omagh, and Belfast Metropolitan College’s Titanic Quarter and Millfield campuses were evacuated on Friday and officers are present in these areas.

A PSNI spokesman said: “Due to the ongoing security alert at the Belfast Metropolitan College at Millfield, motorists are being advised to avoid this area if possible.

Earlier this month the PSNI confirmed it was seeking 100 new officers from all sections of the community.

“It is disappointing that the venues scheduled to host a number of PSNI information sessions for the latest recruitment campaign have been the subject of security alerts,” she said.

“However, past experience has shown that intimidation and threat won’t stop people choosing policing as a career and we know that there are already a large number of applications submitted for this latest competition.

“Those behind these alerts have simply caused inconvenience to a large number of people who have had to be evacuated from the venues and surrounding areas.”

“These security alerts are another demonstration of those who want to drag Northern Ireland back into violence and fear,” he said.

“They want to spread that fear amongst people considering a career within the police service but we can all stand together to make sure they do not succeed.

“Suspicions for these alerts will obviously fall on dissident republicans, but the response to the recent PSNI recruitment campaign is a positive sign that they will not be successful in dragging us back.”

“These actions will achieve nothing but cause great inconvenience to the local communities,” he added.

“Those behind this campaign need to come forward and supply a spokesperson to explain these actions.

“To date they have failed to do so as they are wrapped up in their own destructive agenda.

“These actions serve no republican agenda, of that I am certain.

“It is high time they stop these activities and catch up with the rest of society.”