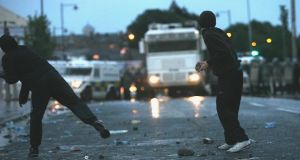 Police in the North have appealed for witnesses to the hijacking of a bus in Newtownabbey on the outskirts of north Belfast.

The incident occurred at the outset of last night’s disorder in the Carnmoney Road area - trouble which saw five police officers injured.

At about 8.10pm a crowd surrounded the vehicle and two masked men ordered the driver to park it up.

Police arrived on the scene and the driver was able to drive off. There was slight damage to the bus but no reports of injuries were linked to the hijack incident.

A crowd of up to 100 people attacked police with bricks and bottles at the Carnmoney Road area.

None of the officers were badly hurt. The trouble flared just after 8.30pm.

A car was set alight and a property was also damaged.

A spokesman for the PSNI said calm had since been restored to the area.

It is understood the disorder erupted after a group of men attempted to remove Irish tricolour flags from lamp posts and were challenged by the PSNI.

An office used by David Ford from the cross-community Alliance Party was targeted by the rioters. A number of windows were smashed. No one was in the property at the time.

The Alliance Party has borne the brunt of anger linked to a decision to restrict the number of days the Union flag flies over Belfast City Hall.

An office belonging to another Alliance Party politician, Stewart Dickson in Carrickfergus, was destroyed by arsonists in December. The party’s only MP, Naomi Long, and a number of local councillors have also received death threats.