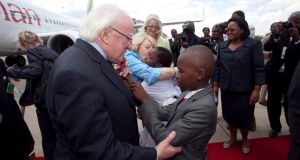 President Michael D Higgins and his wife Sabina on their arrival to Kazumu International Airport, Lilongwe, Malawi on the ninth day of the President’s 22-day official visit to Ethiopia, Malawi and South Africa. Photograph: Chris Bellew

Six Irish missionaries with long service in Africa were honoured at a special private dinner in the capital, Lilongwe, on Wednesday night, attended by President Higgins and his wife, Sabina.

“Ireland’s original pioneers and ambassadors in Africa were our missionaries, who began to arrive here in Malawi at the beginning of the last century,” President Higgins said at a reception for the Irish community in Malawi.

He was “always amazed” in their travels by the number of people whose lives have been changed by “ the education and health services which are the legacy of these selfless, dedicated and committed individuals,” he said.

The legacy of such people “continues today through the inspirational work of their successors here in Malawi and across the globe,” he said.

The guests included Kiltegan priest Fr Gus Frawley, who has been in Malawi since 1970 after being expelled from Biafra during the war.

Other Kiltegan priests included Fr Frank Taylor and Fr Pat Byrne, who serve in Lilongwe, and mathematics professor Fr John Ryan. Absent was Fr Fiachra Cotter, who is on leave in Ireland and Fr Padraic O Maille, honorary consul for Malawi in Ireland, who was deported by a previous regime in Malawi for advocating democracy.

The other two missionary guests last night were Sister of Charity Sr Imelda O’Brien who has been working on pastoral development in Malawi’s southern Thyolo district for the past two years. Previously she had served in Zambia for 33 years and for nine years in Nigeria.

The remaining missionary guest was White Father, Fr Brendan O’Shea who is involved with the Mua Mission in central Malawi, one of the oldest Catholic missions in the country.