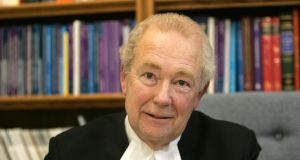 Mr Justice Nicholas Kearns also said he believes the concerns about judicial independence expressed by the Association of Judges of Ireland are "well founded" and he hoped they would be addressed as soon as possible as the present situation was "highly undesirable".

He was reacting to an interview on RTE's Morning Ireland in which the Master, Edmund Honohan, said he feels the row between the Government and the judiciary has erupted out of "a sense of entitlement" that judges should be consulted over any proposed new legislation.

In a short statement today, Mr Justice Kearns said, as some confusion had arisen as to the Master's role within the High Court, he wished to clarify the Master "is not a judge but an office holder with limited functions created by statute".

"He (Mr Honohan) does not operate under my oversight, direction or control," Mr Justice Kearns said.

"Specifically, he has no authority to speak on behalf of the High Court or its judges. Any impression to the contary would be mistaken."

Mr Justice Kearns also said he believed the concerns about judicial independence expressed by the AJI, of which the President of the High Court is not a member, are "well founded".

He hoped "every effort will be made to address these concerns with a view to resolving them as soon as possible", he said. "The present situation is highly undesirable."

The statement comes after the AJI yesterday supported Mr Justice Peter Kelly, who accused the Government of dismantling the judicial system brick by brick.

Judges are angry over a range of issues which they say threaten their independence, including pay, pensions and future appointments.

Earlier today, Mr Honohan said there was no question that judicial independence and integrity was under challenge in any way.

"I’m sorry to say this, but I think Judge Kelly has got it wrong. He's over the top here," he said. "There's no question at all that the judicial independence and integrity is under challenge in any way."

All of this "brouhaha" seems to be about "some sort of sense of entitlement that judges are entitled to be consulted when the minister or the Government proposes new legislation of one sort or another", he said. "Sorry, but that's just not correct."

Mr Honohan said the Minister for Justice was not obliged to consult with judges and, in this instance, the Minister had a better grasp of constitutional propriety.

"In general, it seems to me that most judges would be upset this morning at going into court thinking that the public regards them as having a heightened sense of self-entitlement and concern about their status in society," he also said.

Tánaiste Eamon Gilmore said the airwaves were not the place to debate and dispute whether judges’ independence was under attack.

“I think frankly it is a conversation that is best not conducted in public. I don’t think dialogue over the airwaves is the way this kind of discussion should take place,” the Labour leader said.

“As far as the Government is concerned and as far as I am concerned we respect the independence of the judiciary, full stop.”

Fianna Fáil leader Micheal Martin claimed the country was on the verge of a full-scale constitutional crisis after Minister for Justice Alan Shatter warned that any suggestion of political interference in the judicial system would do great damage to Ireland’s international reputation.

Mr Martin has called on Taoiseach Enda Kenny to intervene in the row.