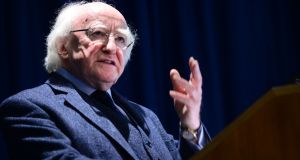 President Michael D Higgins had no choice but to sign the marriage amendment into the Constitution despite the Supreme Court not having considered whether to hear appeals against the referendum outcome, Áras an Uachtaráin has said.

The Supreme Court earlier this month rejected two attempts to appeal the same-sex marriage referendum outcome but noted the issue was moot anyway because the amendment had already been written into the Constitution. The court said this could have had “very serious constitutional consequences” if it had decided there were grounds for an appeal. It also noted “the respect due to the legal process by other organs of State”.

The Department of the Environment and the Master of the High Court have also said they acted in line with their legal obligations.

Mr Higgins signed the Thirty-Fourth Amendment of the Constitution (Marriage Equality) Bill 2015 on August 29th, in effect signing the marriage amendment into the Constitution.

Two days previously, however, the Supreme Court had received applications from two individuals seeking leave to appeal the High Court’s refusal to hear their challenges. Their claims had been thrown out by the Court of Appeal but they were entitled by law to ask the Supreme Court to review the lower court’s decision.

Áras an Uachtaráin said Mr Higgins signed the Bill in accordance with the provisions of the Constitution. “This followed his being presented with the Bill to be signed by An Taoiseach and being sent a copy of the Final Referendum Certificate by the Referendum Returning Officer. In such circumstances, the relevant provisions of the Constitution required the President to sign the Bill forthwith,” the Áras said in a statement.

The Constitution states that the President shall sign an amendment into the constitution “forthwith upon his being satisfied” that the relevant parts of the Constitution have been complied with and that the referendum has been duly approved by the people.

Outlining the sequence of events, the Supreme Court noted that after the Court of Appeal rejected the two individuals’ applications on July 31st, they did not seek a stay on the signing of the Bill pending an appeal to the Supreme Court. The two men nonetheless lodged papers with the Supreme Court within the 28-day window open to them under court rules.

Before the Supreme Court had considered whether to hear the case, however, the Master of the High Court, Edmund Honohan, formally notified the referendum returning officer, Ríona Ní Fhlanghaile, on August 24th. This notice, under a procedure set down in the Referendum Act 1994, confirmed that no leave was granted by the High Court to present a referendum challenge.

On August 28th Ms Ní Fhlanghaile certified on the formal referendum certificate that it had become final and sent it to the Taoiseach and Áras an Uachtaráin.

The Department of the Environment said that on August 24th the returning officer received notification from the Master of the High Court, Edmund Honohan, that no leave had been granted by the High Court to present a referendum petition. Accordingly, it said, Ms Ní Fhlanghaile was “obliged to fulfil her statutory duty” under the Referendum Act and wrote to the President and the Taoiseach on August 28th.

The department also noted the Supreme Court’s observation that no stay was in place on the signing of the Bill after the Court of Appeal threw out the case on July 30th.

Mr Honohan, who is responsible for notifying the returning officer that there is no referendum petition, said the problem was that the Referendum Act did not reflect the changes that took place with the establishment of the Court of Appeal last year. “The process by which the courts system communicates the status of litigation has not been updated to reflect the fact that there are two appeals – to the Court of Appeal and the Supreme Court,” he said.

The department said it would look at whether the legislation should be amended in light of the Supreme Court’s determinations.

n27th August: The two men file their applications to appeal at the Supreme Court office within the 28-day window. They serve papers on the State on the same day.

nAugust 28th: The returning officer at the Department of the Environment certifies on the referendum certificate that it has become final. She then sends written notification of this to President Michael D Higgins and Taoiseach Enda Kenny.

nSeptember 1st: An official notice appears in Iris Oifigiúil confirming that the amendment has been made.

nSeptember 16th: The Supreme Court says it would refuse the men’s applications but notes that “the situation is clearly moot” because the Constitution has already been amended. In other circumstances this would have had “very serious constitutional consequences”, the court notes.