Postmortem carried out on father of Killarney baby Karol Rozycki 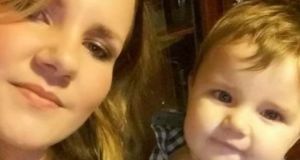 The body of the baby, Karol Rozycki is being returned to Poland on Friday, on an Aer Lingus flight from Dublin.

A postmortem is being carried out today on the body of a 32-year-old man who was found severely injured in the bedroom of the apartment in which his 11-month-old son also died on Sunday.

Andrzez Piolunowicz was found seriously injured in the apartment in Killarney town centre on Sunday and was taken to Kerry University Hospital in Tralee .

Supt Flor Murphy of Killarney gardaí, said that while gardaí were not seeking anyone else in connection with the deaths, both deaths - that of the father and baby Karol Rozycki - are now being investigated.

“There are two deaths now and they will be fully investigated. The investigation will continue to determine the full facts and the full circumstances surrounding the incident,” Supt Murphy said.

An incident room has been set up in the Garda station which is opposite the Park Place apartment complex where the family lived for some months.

Statements have been taken from a number of people in the apartments. Work colleagues and friends are also being interviewed.

Both women had quietly attended the special memorial mass along with 500 people from both the Polish and Irish communities in St Mary’s Cathedral on Tuesday afternoon to pray for baby Karol and his mother Anna Rozycka. They have also met with Ms Rozycka.

Mr Piolunowicz worked at the Aghadoe Heights Hotel, in the accommodation section. His partner and mother of the child Anna Rozycka worked as a chef at the hotel.

Fr Piotr Delimat, the chaplain to the Polish community in Killarney, seconded from the Archdiocese of Krakow, described the incident as a “tragedy for both families”.

He said Anna was “amazed” at the help she received in Killarney and has taken some of the candles left at her door to place on the baby’s grave in southern Poland.

The help from the gardaí, the interpreters and the Irish media in general who kept a “respectful” distance in terms of the contents of the reports and dealing with the family was greatly appreciated, the priest also said.

Mr Piolunowicz had been looking after baby Karol on Sunday. Ms Rozycka raised the alarm when she returned from work at around 6pm and found the apartment very quiet and the bedroom door locked.

Suspecting something was wrong, she raised the alarm and a friend helped to break down the door of the bedroom. It is understood the incident at the apartment had occurred only a short time before she arrived. Paramedics tried to revive the infant.

Baby Karol will be buried tomorrow after 2.30pm mass of the angels at the church of St Martin in Ochaby in the Krakow regions of the southern part of Poland. Ochaby lies around 20 km north-west of Bielsko-Biala. Ms Rozycka has also thanked Aer Lingus and the Killarney undertaker O’Sheas who have met the expenses of the repatriation.

The results of the postmortem on the baby, carried out by Dr Margot Bolster on Monday, the State pathologist who is also conducting the port mortem on the father today, have not been released. It is understood the infant was smothered.