Owners ‘should be accountable’ if learners drive cars alone 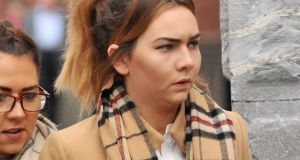 Susan Gleeson of Kilworth, Co Cork, on arrival to Cork Circuit Court where she received a suspended sentence for causing the death of Cork mother, Geraldine Clancy (58), and her daughter, Louise Ann (22), on December 22nd, 2015. Photograph: Cork Courts Limited

The Government needs to introduce new legislation to make car owners equally culpable if a family member on a learner permit drives the vehicle unaccompanied, urged a man who lost his wife and daughter in a car crash caused by an unaccompanied learner driver.

Father of three, Noel Clancy from Leitrim in Kilworth, Co Cork, said that the government and Irish society needed to reflect on the number of young learner drivers who drive cars unaccompanied in contravention of the law.

“I think it is important to reflect on the question on any given day how many learner drivers are on the roads of Ireland unaccompanied and how many parents or family members allow their cars to be driven by these drivers?

“”I am calling on the Minister for Transport to implement legislation so that allowing one’s car to be driven by an unaccompanied learner driver is an offence and would make the car owner and driver equally accountable in law.”

Mr Clancy was speaking outside Cork Circuit Criminal Court where Susan Gleeson (21) was given a three-year suspended sentence for dangerous driving causing the deaths of his wife, Geraldine (58) and daughter Louise (22) in a car crash near their home on December 22nd, 2015.

Ms Clancy’s car ended up being flipped on its roof and pushed through a gap in a stone wall only to fall into a flooded ditch where she and her daughter remained trapped and drowned despite the best efforts of locals including Mr Clancy to rescue them.

Gleeson pleaded guilty to dangerous driving causing death and although Mr Clancy said in a victim impact statement that he could not find it in his heart to forgive Gleeson, he said afterwards that he was glad the court recognised that his wife was blameless when it came to the crash.

“We have always known that my wife Geraldine was a safe careful driver and we knew that she was in no way responsible for the collision. Today this has been publicly recognised by the court,” he said flanked by his children, Fiona and Declan.

“Regardless of the sentence handed down to the defendant, Geraldine and Louise are dead and they are in their graves for all eternity. We miss them greatly and we are serving a life sentence of loss without them.”

Although Mr Clancy would not comment on the three-year suspended sentenced given to Gleeson by Judge Seán Ó Donnabhain, Susan Gray of Parc (Promoting Awareness, Responsibilty and Care) said she and her fellow members of the group were very disappointed with the sentence.

“The Parc Road Safety group are very disappointed by the sentence imposed today for this family. What sort of message is this sentence giving to learners? There is a reason for learner drivers having to have L plates up, having to drive accompanied and having to take 12 compulsory lessons.

Ms Gray – who lost her husband Stephen in a car crash involving a learner driver in 2004 – said Parc backed Mr Clancy’s call for the parents and owners of cars used by learner drivers to be held equally responsible if their child takes the car out unaccompanied by a qualified driver.

“Parents have a grave responsibility to ensure these rules are obeyed. Far too often families are coming to us where a learner driver was responsible for their loved one’s death,” she said, adding seven families in the past five months had come to them after losing loved ones to learner drivers.

“We must have stronger deterrents and far more serious consequences for learners responsible for fatal collisions if we are to reduce the number of families that are coming to Parc when it all far too late for them.”