O’Callaghan ‘not aware’ of bribes paid to councillors

Dunlop claims he was paid IR£1.8m by developer, but didn’t tell him about bribes to rezone land at Quarryvale 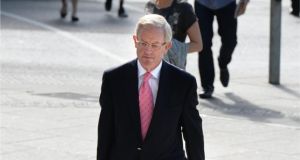 Frank Dunlop told the court today that he met Owen O’Callaghan in 1991 and agreed a fee of IR£1.8 million for lobbying work to secure the Quarryvale rezoning. Photograph: Dara Mac Dónaill/The Irish Times

Mr Kennedy (66) of Queens Quay, Gibraltar, denies making corrupt payments to councillors through Mr Dunlop between 1992 and October 1997 for their votes to rezone land at Carrickmines.

Under cross-examination from Michael O’Higgins SC, defending, Mr Dunlop said he met Mr O’Callaghan in 1991 and agreed a fee for lobbying work to secure the Quarryvale rezoning.

He said Mr O’Callaghan paid him a total of IR£1.8 million for his work but that he never told the developer he was going to bribe councillors for their votes, because he “didn’t know anything about his background”.

“I didn’t know what his reaction might be,” said Mr Dunlop, admitting he had been “deceitful” and feared Mr O’Callaghan might “run away” if he knew he was going to “play a crooked game”.

Mr Dunlop said the agreement was that his lobbying fees would be paid to his false company, Shefran, on which he didn’t pay tax, in order to keep all transactions “off the radar”.

Mr Dunlop said one of the reasons for using Shefran was so that Sean Gilmartin, who owned the Quarryvale site, would not be aware of his role in the project.

He said Mr Gilmartin knew of his friendship with the late Liam Lawlor and because of that, did not want him involved.

Mr Dunlop denied that he treated Mr O’Callaghan like “an idiot abroad” or that he had “shafted him” by tainting all his motions to have the land rezoned.

He rejected the suggestion that by contaminating the rezoning motions he had left Mr O’Callaghan open to an action by the Criminal Assets Bureau to seize profits, similar to the action faced by Mr Kennedy regarding Carrickmines.

“Mr O’Callaghan is a long-standing friend of mine. I speak to him quite frequently. These matters do not in any way obtrude. He has never raised the fact that I might have exposed him to risk. I’d be very surprised if he thought I’d done him down,” said Mr Dunlop.

The court heard testimony given at the planning tribunal where Mr Dunlop had said that the payments he made to politicians using Mr O’Callaghan’s money had been accounted for “in general” but “not in each specific individual case”.

“Mr O’Callaghan never said to me, ‘Did you give so-and-so money, and how much?’” said Mr Dunlop.

He added that his bribes to councillors in 1991 and 1992 had both occurred “conveniently” around election time but agreed that the elections had been “a subterfuge, a cover” whereby bribes could be passed off as legitimate political donations.

Mr Dunlop told the court he contacted Mr O’Callaghan when he got notice from the planning tribunal in October 1998 “because legal fees don’t come cheap”.

He said Mr O’Callaghan agreed to pay his legal fees and did so for over two years before his own lawyers advised him to stop footing Mr Dunlop’s bill.

The former lobbyist also said Mr O’Callaghan had paid him IR£300,000 when he told him he was facing “a problem with revenue” because of the impending tribunal.

In answer to Mr O’Higgins, Mr Dunlop agreed that when he realised the tribunal would be investigating his bank accounts including a large “swill” of money for which no tax had been paid, he contacted revenue and made a voluntary tax declaration of IR£240,000 in late 1998.

He said he called in an agreed “success fee” from Mr O’Callaghan in order to pay his tax bill.

Mr Dunlop agreed that the description used on his invoices to Mr O’Callaghan was for “professional strategic communications and educational services”, and admitted that this sounded “a bit Orwellian”.

Mr Dunlop has testified that Mr Kennedy gave him IR£25,000 in 1991 to bribe four councillors to vote for rezoning at Carrickmines.

Mr Kennedy has pleaded not guilty to 16 counts of making corrupt payments to councillors.

The corruption trial continues before Judge Mary Ellen Ring and a jury of seven women and four men. It is due to last until the end of July.