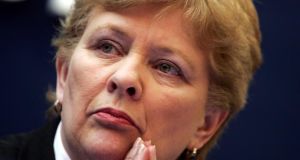 “My objection is policing everywhere is supposed to provide an impartial and independent service and this clearly is not happening when a Garda representative association is taking a stance on a referendum which is being conducted by the state”, said Nuala O’Loan. Photograph: Matt Kavanagh/The Irish Times

Former Police Ombudsman for Northern Ireland Baroness Nuala O’Loan has said she is appalled by calls from the Garda Representative Association (GRA) for gardaí to vote Yes in the upcoming Marriage Equality referendum.

Responding to an editorial in the GRA’s Garda Review magazine in which members were urged to vote Yes, Baroness O’Loan said gardaí were not appointed to engage in political campaigns and must “remain apolitical during a referendum”.

Speaking on RTÉ Morning Ireland, she said: “My objection is policing everywhere is supposed to provide an impartial and independent service and this clearly is not happening when a Garda representative association is taking a stance on a referendum which is being conducted by the state.

“These guards swear an oath that they will discharge faithfully the duties of a member of an Garda Síochána with fairness, integrity, regard for human rights, diligence, impartiality, upholding the constitution and the laws.”

Baroness O’Loan said the GRA’s editorial and general secretary PJ Stone’s decision to stand over the remarks were “totally inappropriate”.

“It is the road to a loss of confidence in the guards,” she said. “The guards need to be building confidence, not losing it.

“It is not the function of police officers who are sworn to uphold the law, to challenge the law and call for people to change the law in this way.”

Baroness O’Loan, who is a regular columnist with The Irish Catholic, was quoted on the paper’s website on Thursday as saying that even though the Garda plays a role in “vindicating the human rights of each individual”, there was “no human right in law, international or European, to gay marriage”. The baroness chaired a formal investigation into human rights in England and Wales for the UK Equality and Human Rights Commission in 2009.

“I believe that marriage is the union of a man and a woman, I believe utterly in the rights of people of the same sex to enter into a relationship and to have the same protection under law.

Mr Stone said on Wednesday that the GRA did not consider the call for a Yes vote a political issue.

Under the oath gardaí take on becoming Garda members, they commit to remaining apolitical, including refraining from joining a political party or working in support of any party.

The Garda Review editorial pointed out the association had long campaigned for equality on issues of disability, race, gender and sexual orientation within the force.

“The marriage equality referendum is the first time that many of our members will have the opportunity to directly support such equality in the legislative process. Your vote is your voice; together we can make a positive difference,” it said.