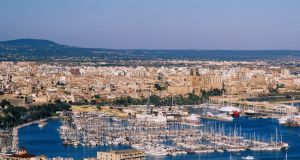 The trial took place on Wednesday at a court in the Majorcan capital Palma. File image: Getty

A Northern Irish man has been sentenced to nine years in jail for raping a woman in a jealousy-fuelled attack at their Spanish home.

Dylan Rory Rogers (28) forced his victim to have sex over two days, after accusing her of looking at another man on the beach and telling her he was going to punish her.

Rogers moved to Majorca from the Ards Peninsula in Co Down. The ex-Bangor Grammar pupil was identified at the time of his arrest as a former Ulster schools rugby player.

Prosecutors detailed the horrific treatment he subjected the woman to in an indictment released ahead of his trial on Wednesday at a court in the Majorcan capital Palma. They accused him of pepper spraying her on one occasion and throwing eggs at her on another, as well as making her dance naked for him and calling her “his slave” on the day of the first rape.

On another occasion he was said to have changed her Sim card in her phone, leading to her losing all her contacts “so he could exert greater control over her” as part of the “situation of dominance he imposed on her through the abusive exercise of his authority and physical superiority”.

After forcing her to perform a sex act on him and raping her on August 7th last year because “he thought she had been looking at another man on the beach”, he stopped her from leaving the apartment the following morning and made her have sex again before physically attacking her.

“He blamed her for the damage he said she had caused him for ‘looking at the other man’ and said she would have to compensate him with the pain he was going to cause her,” prosecutors said in their indictment.

As well as raping her, he hit her and smashed her head against the wall and grabbed hold of her neck, prosecutors said. “He told her he didn’t care whether he had to kill her and covered her mouth with tape.”

Rogers, who has been held in prison since his arrest last August, was jailed for nine years after admitting to a crime of sexual assault and another of wounding.

Prosecutors had been seeking a total sentence of 34 years – 15 each for two separate counts of sexual assault – before his courtroom confession which formed part of a plea-bargain deal.

As well as the prison sentence, he was also ordered to do 80 days community service and given a restraining order lasting 21 years preventing him from going near his victim or trying to contact her.

The 23-year-old woman who he raped, who is from another European country, was in court to watch him sentenced.

Rogers was held by police after his victim managed to escape their eighth-floor apartment in S’Arenal, a holiday resort on the eastern end of the four mile-long Playa de Palma near the island airport, and alert a neighbour.

The sentencing court, Palma’s Audiencia Provincial, was told Rogers had a previous conviction for wounding.