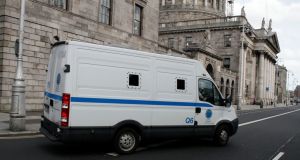 Last Thursday, one prisoner was held in a prison van for more than three hours while awaiting his child’s case. Photograph: Collins Courts

Prisoners who attend the Dublin District Child Care Court are being held in prison vans while waiting for their cases because there are no holding cells at the court.

Last Thursday, one prisoner was held in a prison van for more than three hours while awaiting his child’s case.

The court, which deals with children in the care of the State, moved last month from Dolphin House to Chancery Street Courthouse, behind the Four Courts, also known as the Bridewell. The move was made pending the development of a new family courts complex at Hammond Lane, which is not expected until at least 2020.

Parents in prison are entitled to attend court if their children are in care or are the subject of an application by Tusla, the Child and Family Agency to take them into care.

Prison cells in the 19th century Bridewell building were converted to be used as consultation rooms and there are no holding cells for prisoners.

Legal practitioners working in the court have raised concerns, including about conditions in the back of the vans during cold or very warm weather.

The Irish Penal Reform Trust has said it is concerned prisoners may have to spend long periods in the vans at certain court locations, particularly in advance of court hearings involving the care of their children.

“The practice of handcuffing prisoners inside cellular vehicles – particularly where there are no working seat belts – is also a serious concern, and may risk prisoner safety,” a spokeswoman said.

She said the trust would like to see regular inspections reports from the Prison Service Escort Corp made public, alongside operating procedures grounded in international best practice.

“At a very minimum, the length of time individual prisoners are detained in cellular transport must be recorded on the prisoner escort record system, and where issues are identified these must be addressed,” she said.

“Along with minimum food, water and comfort breaks, maximum wait periods in cellular vehicles should be clearly laid out in Prisoner Service Escort Corps operating procedures.”

A spokesman for the Courts Service said the arrangements in Chancery Street were temporary, pending the development of the proposed Hammond Lane courthouse.

He said the provision of new custody facilities in Chancery Street for temporary use would be costly and not a good investment of scarce funds.

“There is only an average of three prisoners per week brought to these hearings,” he said. “However, we have met with the Irish Prison Service and arrangements are in place to allow people in custody consult with their solicitors within the Chancery Street court building.”

The spokesman also said priority was given to cases where a parent was in custody and such cases were “generally called early, if not first”.

“When a situation arises that legal representatives or professionals attending the court are not ready for such a case to proceed at the start of a sitting, the Prison Service is responsible for security and must make its own decision on the best place to hold an individual while waiting for their case to go ahead,” he said.