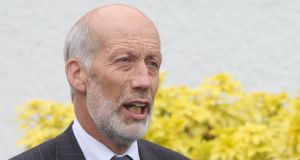 Stormont Minister for Justice David Ford said the Probation Board and its staff made a significant contribution towards making Northern Ireland safer. Photograph: Paul Faith/PA Wire

Probation services in Northern Ireland are outperforming many of those operating elsewhere in the UK, inspectors have found.

The standard of supervision of offenders in the community has been widely praised in a report by Criminal Justice Inspection Northern Ireland (CJI).

Chief inspector Brendan McGuigan said the findings in regard to the Probation Board of Northern Ireland (PBNI) were among the most positive the CJI had delivered on any criminal justice agency it had assessed since it was established almost 10 years ago.

The CJI report, carried out with support from Her Majesty’s Inspectorate of Probation in England and Wales (HMI Probation), was the first comprehensive review of probation practice in the region to be conducted by the body.

“As a small number of these offenders continue to pose a significant risk to the community following their release from prison, it is essential that they are supervised effectively to support their rehabilitation.

“The inspection showed the PBNI to be an effective organisation which understands and accepts its role in delivering public safety and reducing reoffending.”

As part of the inspection, a case review of 100 cases, where individuals were being supervised within the community, was carried out.

Probation practice was evaluated in three specific areas of work - risk of harm assessments; likelihood of reoffending assessments; and compliance and enforcement work.

Inspectors said that in each area, the PBNI exceeded the average percentage scores for similar work carried out in English and Welsh probation regions.

The report noted positive appraisals of leadership and management with the organisation and evidence of supportive working relationships between offenders and probation staff.

The inspectors made three recommendations and identified five areas for improvement. Mr McGuigan said those related to matters of operational practice rather than strategic issues that required wholesale changes.

Responding to the report, Stormont Minister for Justice David Ford said the Probation Board and its staff made a significant contribution towards making Northern Ireland safer.

On a visit to PBNI headquarters in Belfast, Mr Ford said: “This report confirms my understanding of the high quality supervision provided by the Probation Board.

“Probation officers have a difficult and complex job so I welcome that this report recognises their work.”

“We take seriously our responsibility to hold offenders to account, to ensure they comply with court orders and licences and if they do not, we return them to court,” he said.