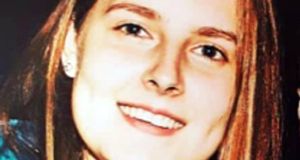 A 23-year-old man accused of murdering his partner told police she died during a sex act, a court has heard.

Dawid Lukasz Mietus, of Drumalane Park in Newry, Co Down, was charged with murdering Patrycja Wyrebek (20). Ms Wyrebek’s body was found in her home on Sunday.

Mr Mietus, who is originally from Poland, was arrested on suspicion of the murder of his partner hours later.

Jonathan Browne, a barrister for the accused, told Newry Magistrates’ Court that Mr Mietus claimed his partner had introduced him to that form of sexual intercourse.

“He said that on that night, they both drank a large amount of alcohol,” Mr Browne said.

“The normal agreement between the two of them was that if there was any threat or danger to either of them, they would use a physical signal to stop the intercourse.

“He said on the morning of question, she never gave him such signal .

“This particular case being made is that this is entirely an accidental death in which there was no intention to kill or cause serious harm.”

The judge expressed “real concern” over the seriousness of the alleged offence and refused him bail. The case will be heard on September 2nd.