Witness was subpoenaed to give evidence by seven newspapers in 2003 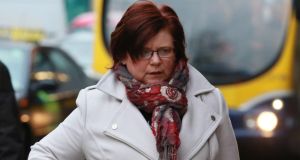 Marie Farrell arriving at the Four Courts on Thursday to give evidence in the Ian Bailey case.Photograph: Collins/Courts

Marie Farrell has told of her dilemma over having to give evidence for seven newspaper publishers in a libel action being brought by Ian Bailey, as her husband had warned her not to return home if she testified while gardaí had told her she would be arrested if she did not testify.

Ms Farrell said she had been subpoenaed by the newspapers to testify for them at Cork Circuit Court in a libel action being brought by Mr Bailey in December 2003 and had been advised by Det Garda Jim Fitzgerald that she would have to attend the trial and give evidence.

She said the subpoena was served on her at her home in November 2003 by a retired garda, John Courtney, who was accompanied by another retired officer, Liam Leahy, who had been Det Garda Fitzgerald’s partner.

She told them that she would not be attending the trial and they told her to contact the solicitors for the newspapers. She contacted Karyn Woods and Sinéad Ryan and met them in a pub in Schull for a coffee.

Ms Farrell said she rang Garda Supt Liam Horgan of Bantry Garda Station to ask why her statements had been handed over to the newspapers. He said he did not know anything about it and he had no control over it but he would get back to her.

She said she had discussions with Det Garda Fitzgerald just before the trial started on December 8th, 2003. “I just told him that there was no way I could go to court and tell lies, but he told me that once I got a subpoena, I had to go to court,” she said.

Ms Farrell said she got a call from local garda Kevin Kelleher on the evening before the case was due to begin, asking her would she go to court. She told him she was not going but she agreed to reconsider and he again rang her the next morning and she told him she would not be attending.

She received phone calls from Det Garda Fitzgerald who was “a bit more sympathetic” and Garda Kelleher and then she received a call from retired chief supt Dermot Dwyer, who told her that if she failed to show up after being subpoenaed, she could be arrested and brought to court.

“My husband said not to go to court and if I did go to court, not to come home and Dermot Dwyer was telling me if I didn’t go to court, I would be arrested,” Ms Farrell said.