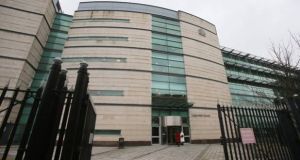 A man who tried to pawn Noah Donohoe’s laptop while searches for the missing Belfast teenager were ongoing has been jailed for three months.

Daryl Paul (33) pleaded guilty to finding and stealing a rucksack containing the teenager’s laptop computer and schoolbooks on the day the boy went missing. His lawyer described it as an opportunistic offence carried out by a thief who at no stage had any personal contact with Noah.

The body of Noah Donohoe (14) was recovered from a storm drain in the north of Belfast in June last year, six days after he disappeared while on a bike ride.

A postmortem examination established that he died as a result of drowning.

Belfast Magistrates’ Court heard Noah had the backpack and belongings with him when he vanished on June 21st, 2020.

Three days later a man and woman went into a Cash Converters store and attempted to sell the laptop. At that stage a high-profile search operation for the schoolboy was continuing. Staff at the shop refused to buy the computer and alerted police, with Paul then identified as the man through CCTV footage.

During interviews he stated that he took the rucksack home after finding it propped up against a wall near Ulster University buildings in the city centre, but was unable to turn on the laptop. Paul, of Cliftonville Avenue in Belfast, claimed he did not look at books inside the bag in detail.

“He said he didn’t know the bag belonged to the missing boy Noah, and if he had known that he would have returned it immediately,” a Crown lawyer told the court. “He said that he did make some positive efforts to unite the bag and contents with its owner, and he was planning to try and return it at some stage.”

Defence barrister Taylor Campbell stressed that police accepted there was “no personal overlap” between his client and Noah. “This is just an opportunistic, dishonest person finding a rucksack and treating it as his own,” counsel said.

Referring to the high level of publicity surrounding the case, Mr Campbell contended that Paul has been threatened and “vilified” on social media. According to the barrister, information provided by Paul led to the laptop being located last June.

“He couldn’t have been more co-operative and helpful in moving the police investigation along,” counsel said.

The court also heard the defendant’s chaotic lifestyle of drink and drug abuse has left him needing medical treatment for a serious liver condition. “He’s survived one bout of hepatitis through his own immune system, but the doctor thinks he might not survive another,” Mr Campbell added.

The judge made clear, however, that no penalty was being imposed for who the stolen items belonged to. Mr Justice McStay acknowledged: “There is no overlap between this accused and the terrible tragedy that befell poor Noah.”