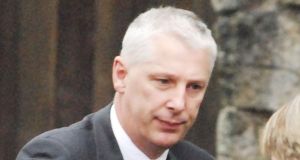 A man who stabbed his victim seven times over a cigarette lighter, leaving him with a punctured lung, has been remanded in custody for two months pending sentence.

Patrick Browne (26) also held knives to shop workers in a newsagent on Christmas Eve 2013 when he robbed the shop twice in the same day.

He further pleaded guilty to robbing a total of €1,050 in cash from Daybreak on the New Cabra Road on two occasions on December 24th, 2013.

Sgt Patrick Keegan told Séamus Clarke BL, prosecuting, that Mr Consier, was drinking with a group outside the shopping centre when Browne approached him asking him for a lighter.

Mr Consier said he didn’t have a lighter and Browne started to punch him. Mr Consier ran to a nearby pharmacy and Browne followed him and stabbed him in the left wrist as he defended himself.

When Mr Consier fell to the ground, Browne continued to stab him a further six times and started to kick him in the legs.

Security guards tried to help Mr Consier and gardaí­ were called. Browne was arrested a short time later at a bus stop and made admissions.

Mr Consier was brought to hospital and treated for the stab wounds which were several centimetres in length. He also was treated for a punctured lung.

Sgt Keegan agreed with Michael Bowman BL, defending, that both men had consumed a lot of alcohol on the day and that Browne suffers serious mental health issues and has epilepsy.

Evidence was also given that at 3.18pm on December 24th, 2013, Browne entered Daybreak on New Cabra Road wearing a white Hallowe’en ghost mask and carrying an eight-inch knife. He threatened the shop worker and warned him not to press the panic alarm or he would stab him.

He grabbed €150 from the cash register and fled, throwing the knife and mask at the back of Cabra Park.

Later that evening, Browne returned to the same shop wearing a white skull mask and carrying a 12-inch knife. He put the knife to another shop worker’s neck and told him he would kill him if he didn’t open the cash register. He made off with €900 in cash.

He was arrested a short time later and admitted the crime saying he needed money for drugs.

Judge Martin Nolan said he wants a report from the prison authorities on how Browne would adapt to prison life considering his medical problems. He remanded him in custody for two months.