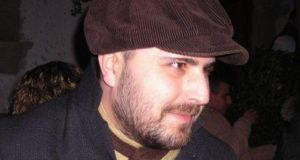 Saverio Bellante (pictured), who killed his friend Tom O’Gorman at the house where they were living in Dublin in January 2014, is suing the HSE and his psychiatrist.

A man who killed his landlord and dismembered his body is suing the HSE and his psychiatrist.

Saverio Bellante (36) admitted killing his friend Tom O’Gorman (39) at the house they were living in as landlord and tenant in Castleknock, west Dublin, in January 2014.

He was found not guilty of the crime by reason of insanity at the end of July last year and is being detained at the Central Mental Hospital in Dundrum.

Mr Bellante had been diagnosed with psychosis in 2005 and remained on medication for almost 10 years, continuing his treatment in a Dublin facility when he came from his native Italy to live in Ireland.

His medication was stopped under the direction of a psychiatrist in Dublin two days before he killed Mr O’Gorman and cut out his right lung.

He thought the organ, which was found in a plastic bag in the kitchen of the house at Beechpark Avenue, was Mr O’Gorman’s heart. He said after the killing he planned to cook it and eat it.

Ms Justice Margaret Heneghan told the jury at the Central Criminal Court last year that while they must decide if Bellante was insane, “all the evidence in the case points one way”.

Two psychiatrists who gave evidence in the trial said Mr Bellante - who has been in custody at the Central Mental Hospital, Dundrum, south Dublin, since the killing - met the criteria for the insanity verdict.

Catherine O’Gorman, sister of Tom O’Gorman, told the court in a victim impact statment that she and her other brother Paul O’Gorman had felt “absolute devastation” since his death.

She said that while the 39-year-old was described during the trial as a victim of crime, this is not how she remembered him.

She said the greatest injustice, which no court of law could ever address, was the “unnecessary fact of Tom’s death”.

Ms O’Gorman said that for the benefit of the jury they have heard in great detail the acts of violence committed upon Tom, for his loved ones however they can only think about whether he suffered, whether he was afraid, and what he experienced.

“The last year and a half have been unimaginably painful. While we are grateful to the court for giving us the opportunity to make this statement, it is impossible to adequately articulate how this has impacted our lives.”

The HSE noted it had been reported that court proceedings had been lodged.

But it said that as it did not manage claims against it - which was a function of the State Claims Agency - it would not have been informed “at this juncture”.