Man was not entitled to cut down neighbour’s trees, judge rules 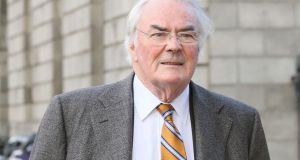 Dermot P. McArdle, a company manager who is suing his neighbour Colin Kilgannon and his wife Jelena over the felling of trees between their properties.Photograph: Collins Courts. 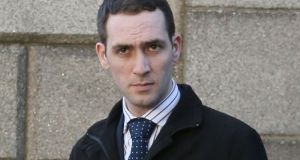 Colin Kilgannon, a Dublin systems engineer, had no entitlement to cut down his next-door neighbour’s 50-year-old trees, a judge in the Circuit Civil Court ruled on Friday. Photograph: Collins Courts.

A Dublin systems engineer had no entitlement to cut down his next-door neighbour’s 50-year-old trees, a judge in the Circuit Civil Court ruled on Friday.

Circuit Court President, Mr Justice Raymond Groarke, said Colin Kilgannon should have followed his legal team and surveyor’s advice to discuss with neighbour Dermot P. McArdle where the boundary between their properties lay.

Judge Groarke said it was most regrettable that Mr Kilgannon, of Sans Souci, Kilgobbin Road, Stepaside, purposefully chose to ignore those advices and decided to rely only on maps he had, showing that the 50-feet high trees, allegedly causing structural damage to his house, where on his property.

Mr McArdle, a company manager who is suing Kilgannon and his wife Jelena said that in September last he had been trying to sell his property at The Pine Trees, Kilgobbin Road, Stepaside, and had been shocked to find that Mr Kilgannon had carried out the tree felling.

Judge Groarke only ruled on where the boundary was and whether or not Mr Kilgannon had trespassed on Mr McArdle’s property. The issue of damages will be dealt with at a later date.

The judge said he was satisfied a fence had been erected in the 1960s by a previous owner of Sans Souci, with Mr McArdle’s agreement, after they had determined where the boundary was, relying on maps.

Mr McArdle had then planted the trees in 1968 on his side of the property. The Kilgannons bought Sans Souci in December 2014.

Judge Groarke said he found Mr McArdle’s evidence more credible, and did not believe, as alleged by Mr Kilgannon, that he had agreed to the removal of the trees, which would have constituted an eyesore, although he wanted to sell The Pine Trees property.

The judge said he also did not believe Mr McArdle had agreed to a fence being replaced by Mr Kilgannon, encroaching on The Pines Trees property for more than a metre. He said if it were so, “there would have been hell to pay.”

Judge Groarke said he believed if Mr McArdle had agreed to the trees being removed, he and Mr Kilgannon would have gone on site and decided which ones were to be removed and would have marked them.

The judge said it was his view that after a conversation they had last year, Mr McArdle had neither given Mr Kilgannon his consent nor his approval to the removal of the trees and if there had been a misunderstanding as alleged by Mr Kilgannon, it was his only.

Judge Groarke said he was satisfied Mr Kilgannon, who cut down seven trees and strongly trimmed back four others, had trespassed on Mr McArdle’s property.

Mr McArdle had told his barrister Andrew Walker that when the incident happened, he and his wife, Margo, had been living in an apartment they had just bought in Dublin and had been unaware of Mr Kilgannon’s plans. They had been relying on the sale of The Pine Trees to cover the purchase of the apartment.

He said that before the incident his property had been valued at nearly €900,000, but a last purchase offer had shown the property valuation had been reduced to €810,000, a reduction in value of €90,000.

Mr Kilgannon claimed Mr McArdle had given him permission to cut down the trees, which he alleged were on his property. He said he felt under pressure at the time as his wife Jelena was seven months pregnant and was very distressed about the trees causing damage to their house. The court heard Mr Kilgannon had gone and cut them down himself.

The case was adjourned to a date to be fixed in order to determine damages.