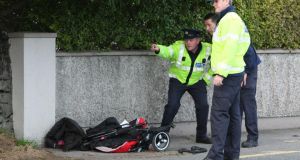 A child’s buggy at the scene of the accident on the Milltown Road outside Tuam last October.

A man charged in connection with the deaths of two small girls on a road in Co Galway last year has been sent forward for trial.

John O’Connor, in his 40s, from Waterslade Downs in Tuam, is charged with dangerous driving causing the deaths of two-year-old Kate Gilmore and her three-month-old sister, Grace, on the Milltown Road, Tuam, on October 21st last.

He also faces a charge of intentionally or recklessly driving a vehicle after twice previously receiving medical advice not to drive, as he had suffered renewed seizure activity.

The accused appeared at a scheduled sitting of Tuam District Court yesterday, having been remanded on bail last April.

Garda Noelle Kilduff yesterday told the court that a hard copy of the book of evidence has been furnished to Mr O’Connor.

Judge Denis McLoughlin returned the accused man for trial at the next sitting of Galway Circuit Criminal Court on July 2nd.

Mr O’Connor was also remanded on bail to appear at Tuam District Court on December 10th to answer three other charges.

The children were killed when struck by a car while out walking with their father, John Gilmore. Mr Gilmore was also seriously injured in the incident.