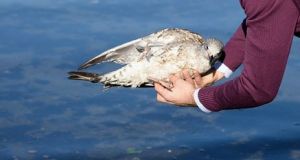 A bare-chested man carrying a bleeding seagull stormed out of a vet’s surgery and caused damage to a door after being told the bird could not be treated because it is was a wild animal, a court heard.

When police went to the home of Colin Lowes (47), of Torr Gardens, Larne, Co Antrim, they found him sitting with the injured seabird.

The injured gull subsequently died and the defendant gave it a funeral at sea by releasing its dead body into Larne harbour to float away.

A prosecutor told Ballymena Magistrates Court on Thursday that on June 30th last year police received a report of criminal damage at a veterinary surgery in the Larne area.

They were told a man had entered with no top on carrying a seagull wrapped in his T-shirt.

Lowes was told by staff they could not deal with the bird as it was a wild animal, and instead told him to contact the Ulster Society for the Prevention of Cruelty to Animals (USPCA).

The prosecutor said that after an argument, Lowes stormed out, causing a crack in a glass door which cost more than £150 (€189) to repair.

At court he pleaded guilty to causing criminal damage.

Defence barrister Neil Moore said Lowes was out with his partner when he found the injured seagull.

Thinking he was “doing the decent thing” for the bleeding bird, he took it to the vet’s.

Mr Moore said his client was essentially told that as it was a wild animal, there was nothing they could do. On the way out, “struggling with the bird, the door was accidentally cracked”, he added.

Mr Moore said it was a “highly unusual case” and that when police visited Lowes’s home he was sitting with the seagull.

District Judge Des Perry told Lowes he had no doubt he was “acting in the best interests of this creature”, but he should have taken the advice of the vet’s staff and contacted either the USPCA or the Royal Society for the Protection of Birds (RSPB).

He gave Lowes a one-year conditional discharge and ordered him to pay for the damage to the door.