Man arrested after being found with bomb parts in Dublin 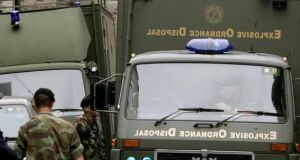 Explosive Ordnance Disposal was called to the scene in Dublin shortly after 6am on Thursday. File photograph: David Sleator/The Irish Times

A man has been arrested after being found with components of an improvised explosive device in the Store Street area of Dublin on Thursday.

Gardaí said they arrested a man in his 40s after stopping him and conducting a search shortly after 6am.

The Army Bomb Disposal Team was called to the scene at about 6.50am and removed a “suspect package”, according to gardaí.

The Defence Forces said the team removed component parts of an explosive device, which were taken for further examination.

The area was cordoned off to the public and reopened at 7.30am.

The man is being held under Section 30 of the Offences Against the State Act, 1939, at Irishtown Garda Station.