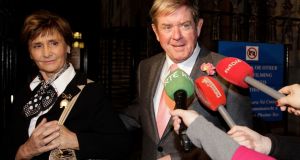 Record: former deputy chairman of Kenmare Resources Donal Kinsella leaving court with his wife Joan after he was awarded €10 million in damages in a defamation case at the High Court. Photograph: Collins Courts 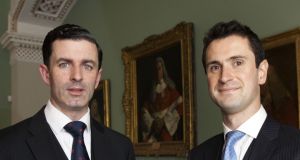 Damage, and damages. In law, the latter is often the only practical, although in many cases, wholly inadequate, means of compensation for the former.

The Court of Appeal recently upheld a seminal High Court decision upholding the basis for a €15.9 million award for nine-year-old Gill Russell, who suffered catastrophic injuries as a result of negligence in the circumstances of his birth at a Cork hospital.

Publican Frank Shortt got €1.9 million from the Court of Criminal Appeal for what the State’s own lawyers described as the “worst case of State oppression” of an individual in the State’s history.

Louise O’Keeffe got €305,105 in default against Leo Hickey, the teacher who sexually abused her in Dunderrow national school, in Co Cork, and ultimately won a declaration from the European Court of Human Rights that the State failed to protect her from sexual abuse in school.

An appeal is pending against a record €10 million award by a High Court jury to businessman Donal Kinsella after they decided in 2010 he was defamed in a press release issued by his employer, Kenmare Resources, about an “incident” during a company trip to Mozambique in which he sleep-walked naked to a female colleague’s bedroom.

A €900,000 damages award by another jury to Traveller Martin McDonagh for libel in a Sunday World article was recently overturned by the Court of Appeal, and the potential peril of appeals against defamation awards was also underlined in an action by businessman Denis O’Brien.

After the Supreme Court upheld arguments by the Irish Daily Mirror that a €250,000 libel damages award to Mr O’Brien was excessive, the case went to a different High Court jury, which awarded him €750,000.

These and many other cases attract headlines, but there is often little awareness or understanding of what legal principles govern the Irish courts’ decisions on damages and how amounts are assessed.

The succinctly titled Damages aims to fill that vacuum with an accessible, detailed and up to date analysis of the issue of damages in Irish law. Written by barristers Tadhg Dorgan and Peter McKenna, it is aimed at the legal profession but contains much material likely to attract those with even a passing interest in how the courts reach their decisions.

High Court judge Marie Baker, in her foreword to the book, describes it as a “long-overdue and most welcome” examination of the complex law on damages.

Senior counsel Liam Reidy, who has decades of experience in personal injuries litigation and particular expertise in medical negligence cases, describes Damages as an “invaluable” guide for practitioners.

According to Reidy, there has been “a serious gap” in reference material on damages law for two decades, but this “more than adequately” fills that. He also considers that the authors’ analysis of defamation law here, including the impact of the Defamation Act 2009, should be of particular interest in media circles.

The book aims to provide solicitors and barristers with a guide to approaching the issue of quantum, the sum of damages to be claimed, and in advising clients on the prospects of success for a particular action.

It contains detailed commentary on general principles of approaching quantum, including contributory negligence, and also addresses substantive areas of law, including the broad areas of personal injuries and psychiatric damage; bullying and harassment; wrongs to the person and misfeasance; actions affecting land and goods; and contract disputes.

The effect of the economic crash is evident in the exploration of claims for professional negligence, including an explosion of negligence claims against bankers, stockbrokers, auctioneers, valuers and, yes, lawyers.

The authors also address damages under statute, statutory and nonstatutory schemes. These include the Hepatitis C and HIV compensation schemes for those infected with contaminated blood products, Army deafness cases, Garda compensation cases for injuries or death suffered in the course of duty, and claims under the Criminal Injuries Compensation Scheme.

More recent schemes include that introduced under the Residential Institutions Redress Act 2002 to compensate residents of former State-run institutions.

The book was completed prior to the recent Court of Appeal ruling in the Gill Russell case, which upheld the High Court’s reduction of the rate of return, or the rate at which a lump-sum award will yield an investment as set against interest. The Russell decision means higher awards and there is an in-depth analysis of the basis for, and implications of, the High Court decision.

A chapter entitled “Practical Considerations”, incorporating a brief section about a number of rulings on liability for legal costs, concludes this impressive work. Fear of incurring substantial costs should their actions fail remains a real concern for many contemplating litigation in the High Court. An accurate and realistic guide to the likely costs of such litigation is long overdue.

While that is not the task of the authors here, their detailed analysis of all the important Irish cases should nonetheless prove very useful to not just lawyers, but also potential litigants, in deciding whether their case has any realistic prospect of success.

Damages, by Tadhg Dorgan and Peter McKenna, is published by Round Hall

Seven more people die in Northern Ireland from coronavirus 18:14
Boy (5) who died in farm accident in Co Roscommon is named 18:05
Surge in unemployment payments to more than 700,000 18:03
Coronavirus: 16 people have died in Republic bringing total deaths to 174 17:50
‘It’s a leap into the unknown, a real baptism of fire’ - medical students graduate early 17:30