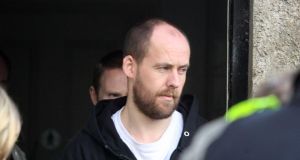 John Geary (37), of Meadow Court, Newcastle West, Co Limerick, stabbed his ex-partner and their five-month-old daughter to death because she had left him. He stabbed the other woman and child to death because they had arrived at the scene and caught him. Photograph: Don Moloney/Press 22

A Limerick man has been given four concurrent life sentences for murdering two women and two children.

John Geary (37), of Meadow Court, Newcastle West, Co Limerick, stabbed his ex-partner and their five-month-old daughter to death because she had left him. He stabbed the other woman and child to death because they had arrived at the scene and caught him.

Geary had pleaded guilty to murdering his ex-partner Sarah Hines (25), their five-month-old daughter Amy, her three-year-old brother Reece and 20-year-old Alicia Brough at a house in Hazelgrove, Newcastle West, on November 15th, 2010.

Det Insp Eamon O’Neill told the Central Criminal Court gardaí had found two knives and a screwdriver at the scene but believed up to five weapons had been used.

He explained that when Geary arrived at the house that day he found Sarah and Amy Hines.

“Alicia Brough had taken Reece to the butcher’s,” he said.

He said Geary had attacked mother and baby with a knife with exceptional violence. He inflicted 21 wounds on his ex-partner’s face, neck and chest, including seven stab wounds and eight incise wounds. Geary inflicted nine knife wounds on his baby daughter.

Det Insp O’Neill said a pathologist found Sarah Hines had struggled to defend herself, but would have collapsed once she sustained knife wounds to her heart and lungs. The postmortem findings suggested Amy Hines died rapidly.

“It would be our belief that Alicia Brough walked in on the attack,” said Det Insp O’Neill.

He explained Ms Brough sustained 14 to 16 wounds to various parts of her body and that they would not have resulted in immediate death.

Geary used a screwdriver to kill Reece, who was not related to him. He inflicted 15 wounds on the boy, including a number of penetrating wounds to his neck, spinal cord, lung, heart and aorta. His death would have been rapid, if not instant.

“He used a knife, which broke in the killings,” he said the detective, explaining that Geary then used a sickle knife before using a screwdriver to attack Reece. He said Geary then changed his clothes before walking home.

However, he realised that he’d left his key in Hazelgrove and so returned to the scene and got his key. Before he left he locked up the house, meaning gardaí had to force the door when the alarm was raised the following day.

Geary then travelled by bus to Kilkee where he checked into a guesthouse and had a drink at the bar. He had a full breakfast the following morning, before going to two pubs. He was arrested in the second pub that afternoon.

Det Insp O’Neill said Geary met Sarah Hines in 2008 and that they’d had an on-off relationship until she became pregnant with Amy in 2009. They had become close again after the birth, but split again soon afterwards.

“It’s our belief that Mr Geary was driven out of jealousy and control,” he said. “As far as she was concerned, they had split. He wasn’t accepting that.”

Geary had told people he wasn’t happy, he said. Ms Hines had entered a new relationship and Geary at one stage took her phone away to prevent contact with her new boyfriend.

“It’s our belief that John Geary became very, very jealous and went to confront her,” he said.

Det Insp O’Neill explained that Geary had attended horticultural college and was from a decent, high-achieving family. He had limited contact with them since he was 18, but had gone to visit them after Amy’s birth.

He added Geary had previous convictions for larceny, forgery, theft and burglary.

He agreed with Hugh Hartnett SC, defending, that Geary had been treated for depression in the two years before the murders.

Alicia Brough’s mother, Maria Dempsey, then entered the witness box to deliver her family’s victim impact statements. She said they had received their daughter’s ashes on her 21st birthday.

“Losing a child/sibling at the hand of another was devastating, and since her death our family’s lives have been changed for the worse - our children’s innocence has been lost,” she said.

She said she was pregnant when her daughter died and that what should have been a joyous time was a time of grief.

She said she was not able to be the parent to her other children that she wanted to be.

She said she and her husband, Paul Dempsey, had provided their family with values that promoted compassion, love and honesty.

“As a family we are grieving the loss of not only Alicia, but also the loss of peace and innocence, which we have endeavoured as parents to provide to our children,” she said before also reading statements written by her husband and Alicia’s siblings.

Sarah Hines’s stepfather, Peter Rolfe, said the impact of the murders had been catastrophic and that he would never want another family to go through what his had endured.

“She was our family’s only girl,” he said through tears. “Reece and Amy were our only grandchildren.”

“Their deaths have left me scarred,” he continued.

“I picture her trying to protect her baby,” he said of Ms Hines.

He said he would always feel guilty for introducing her to Geary, suggesting that, had he not, all four would still be alive.

Ms Hines’s godmother, Lou O’Rourke, read a statement on behalf of the dead woman’s mother, Abina Ring, who said that her daughter was the glue that kept the family together.

“The callous murder has had a devastating effect on us,” she said. “We will be forever haunted.”

She said that she had a heart attack late last month following a meeting with gardaí in which she learned the extent of the injuries. She had surgery and will be on medication for the rest of her life.

“The longer the distance from the day of the crime, the harder it gets,” she concluded.

Statements were also read on behalf of Sarah’s brothers, one of whom asked how anyone could be so heartless to kill two young, defenceless children.

Mr Hartnett said his client wished to express his remorse and read a note in which Geary acknowledged destroying two families’ lives.

“I can’t turn back what happened,” he wrote before saying he was truly, deeply very sorry for killing his ‘beautiful daughter’ and the three other victims.

Mr Justice Paul Carney sentenced Geary to the mandatory penalty of life imprisonment on each count. He said that if he endeavoured to make any of those sentences consecutive, another court would set that aside, so he ordered that all four sentences would run concurrently.

“I have no power to specify a minimum term to be served,” he explained.

Geary showed no emotion during the hearing or sentencing, before being led away to begin his life sentence.

Members of both families spoke briefly outside the court to thank the authorities and ask for privacy.