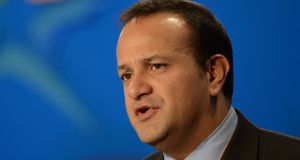 Leo Varadkar said he plans to legislate next year for the introduction of a roadside device to test for drug impairment by either illicit or legal drugs. Photograph: Alan Betson/The Irish Times

The Minister for Transport has criticised judges for their handling of road traffic cases, saying he was frustrated by their use of the poor box, their reluctance to convict drivers from other countries and ongoing problems with the imposition of penalty points in the courts.

In an interview with The Irish Times, Mr Varadkar said it was “very frustrating, and kind of wrong” that people are getting the poor box. “It is one thing to say that you are not going to apply a conviction to somebody, it is another that the driver doesn’t get any penalty points at all. They should get the penalty points,” he said.

The Minister is also concerned at the inconsistent application of a new law requiring drivers before the courts to bring their licence details so points can be recorded.

Thiswas being applied in a “very patchy way” and less than half of motorists were bringing their licence to court and receiving points, he said.

A failure to bring a licence to court is a specific offence. However, Minister for Justice Alan Shatter admitted in October that not one driver has been prosecuted for it.

Road Safety Authority chairman Gay Byrne has written to Mr Shatter to express his frustration at this issue.

The Oireachtas can legislate with the best of intent “but it seems the sentiment of the judiciary can often go the other way”, he added.

The Minister also questioned the reluctance of some judges to convict out-of-State drivers, saying it was “practically impossible” to convict a motorist from outside the jurisdiction for a driving offence here.

“Judges in Ireland are very reluctant to try anyone in absentia and they largely won’t accept documentary evidence that a summons was served.This is not satisfactory and is impractical in my view.”

He contrasted this with the judicial system in the North, where he said a clear majority of judges will accept documentary evidence.

Mr Varadkar said he plans to legislate next year for the introduction of a roadside device to test for drug impairment by either illicit or legal drugs.