Remains of internationally acclaimed novelist to be cremated next week 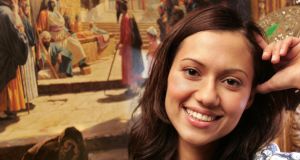 Locals in Lecanvey, Westport, Co Mayo, say internationally acclaimed novelist Marsha Mehran, who was found dead in her apartment on Wednesday, led a “reclusive” life and they saw little of her.

The remains of the bestselling, 36-year-old author of such books as Pomegranate Soup and Rosewater and Soda Bread are to be cremated next week.

Gardaí say there is nothing suspicious about her death. Toxciology tests are to be carried out as a follow-up to a postmortem to determine the cause of the sudden death.

Residents of Lecanvey, a seaside village overlooking Clew Bay, say they saw little if anything of Ms Mehran over the years.

One local who uses the local beach frequently today said he never met the writer out walking or socially over the years, although he was aware of her presence in the locality.

Ms Mehran’s body was discovered by the letting agent of her apartment at Pier House, Lecanvey.

There was no sign of any break-in or suggestion of foul play.

The dead woman was born in Tehran but migrated with her family to Argentina in 1979 at the time of the Iranian Revolution.

Later she moved to the United States and has also lived in Australia, where her father still lives, and in the west of Ireland.

In an interview some years ago with a Canadian publication, Ms Mehran gave an insight into her personal life, her inspiration for writing and her love of Ireland.

Part of the inspiration for Pomegranate Soup came from her experiences of Co Mayo, the native county of her former husband, she said.

Asked whether it had been important to her that the story had been set in Ireland, Ms Mehran replied: “There is something absolutely mystical about the Irish countryside, and I knew that if there was one place on Earth where my Aminpour sisters could find hope and a fresh start, it would be amongst the heather and clover fields of Éire.

“The landscape is integral to the renewal theme that runs throughout the book.

“There is a particular permissiveness to the Irish culture as well, one that is not entirely apparent to the casual observer. Irish people have a tendency to initially back away from new people and encounters, but once they let their guard down, they will defend you to the end.”

It is believed Ms Mehran had been dead for more than a week.

Gardaí in Westport earlier said they are treating the matter as “a sudden death” .

“There is nothing suspicious”, a spokesman commented this afternoon. “There was no sign of a break-in or any foul play”.

It is understood Ms Mehran had been married to a man who is a native of the Co Mayo area, but the pair had recently divorced.

The best-selling Pomegranate Soup (2005) has been translated into 15 languages and published in over 20 countries.

Rosewater and Soda Bread was published in 2008.

Due out this year is a novel, The Margaret Thatcher School of Beauty, which Ms Mehran set in Buenos Aires during the Falklands War.