Kinahan gang is part of a ‘huge crime conglomerate’ 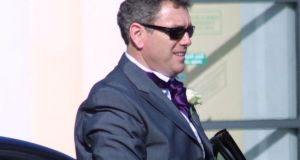 Dubliner Christy Kinahan is the leader of the Irish Kinahan gang in southern Spain. Photograph: courtesy of the Sunday World

The Russian mafia and notorious Marseille mafia were among the groups working alongside the Irish Kinahan gang in southern Spain, creating “a huge crime conglomerate”, one of the Garda’s most senior and experienced officers has said.

Assistant Commissioner John O’Mahony said the police forces from all of those countries whose gangs had a presence in Spain were looking for the help of the Spanish authorities in catching them.

Mr O’Mahony, who is in charge of the crime and security section of the Garda and is a former head of the Criminal Assets Bureau, suggested the Garda was competing in that environment.

He did not name the international drugs gang led from Spain by Dubliner Christy Kinahan, the group that is suspected of carrying out six of the seven feud murders in Ireland since Gary Hutch (34) was shot dead in Spain last September.

“The reality of it is that we’re dealing with a huge, huge crime conglomerate, if you like; we’re not just dealing with Ireland,” he said.

“There is no doubt about it – what’s happening in this country and what’s impacting on our communities, particularly the inner city communities of Dublin, is being orchestrated from the south of Spain and Holland, indeed the UK.”

Mr O’Mahony said gang members such as those responsible for Veronica Guerin’s murder 20 years ago had been extradited back to Ireland to stand trial and the same would happen again.

However, he said the fact that some of those criminals directing feud-related violence on the streets of Dublin were outside the jurisdiction presented challenges.

“You are dealing with different jurisdictions, different legislation and different priorities,” he said.