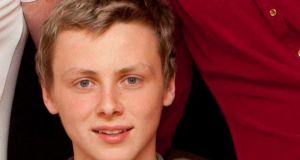 Donal Walsh (16) from Blennerville, Tralee, who is dying from cancer and who has asked his peers to think twice before taking their lives

A coroner yesterday made an emotional plea at the end of his court after all but one of the inquests into deaths in south Kerry were found to be suicide.

South Kerry coroner Terence Casey pleaded with young people in Kerry to heed the words of 16-year-old Donal Walsh from Blennerville, Tralee who is dying from cancer and who has asked his peers to think twice before taking their lives.

Five out of the six inquests, all of them male, at Killarney coroner’s quarterly court yesterday returned verdicts of suicide. Two of the young men were only 16, one was 21, one 22 and one aged 30.

At the previous two sittings of the coroner’s court presided over by Mr Casey seven out of the eight deaths were by suicide.


Families distraught
Yesterday families were openly distraught and several sobbed as the shock of finding their loved ones was outlined in the starkest terms at a court that inquires into circumstances surrounding deaths – the where, when, what and how, but not why.

At the end of the hearings Mr Casey said: “It is a tragic situation to sit here this morning and look up and see the grief of the families.

“This is a very very big problem in Co Kerry,” he added. “It’s a most unfortunate situation that we have to face in this county where young people take their own lives.”

He asked the youth of Kerry to consider a recent statement by cancer patient Donal Walsh who asked young people to think twice before taking their lives. Mr Casey said they should do so “before they leave such grief behind them”.

“It is a crying shame not more money is being put in to prevent suicide,” Mr Casey said.

He singled out the gardaí from Kanturk and Killarney who were called to the scenes at Fieries, Gneeveguilla, Rathmore, Killarney and said they had been “exceptional”.

Supt Flor Murphy said the gardaí will always strive to deal with this tragic situation sensitively.

All but one of yesterday’s suicides took place in the winter and Christmas period – November to mid-January. Some of them had consumed alcohol, some not.

An inquest into the death of a 16-year-old boy from Gneeveguilla heard of the desperate search by his father for his son over a number of hours when he was found to be missing from his bed.

All of the dead had been found by their fathers, uncles, or wives.