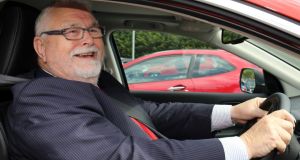 Lord Maginnis, arrives at Dungannon court house. The House of Lords peer has been convicted of assaulting a motorist in a road rage incident in Northern Ireland. Photograph: PA

Lord Ken Maginnis, the former Ulster Unionist MP for Fermanagh and South Tyrone has been found guilty of assault during a “road rage” incident last year.

He has been ordered by Dungannon Magistrates Court to pay a £200 fine and the same amount in compensation to Keith Kirk whom he admits he called “a yellow bellied bastard”.

The case arose from an incident in Dungannon, Co Tyrone last year when an altercation arose after Lord Maginnis (75) allegedly pulled out in front of the vehicle being driven by 21-year-old Mr Kirk.

The peer, a former major in the Ulster Defence regiment, admits he issued an angry tirade against Mr Kirk but denies grabbing him or forming a fist as if to strike him.

The defence claims Mr Kirk made up the allegations. Lord Maginnis also claimed he only got out of his car to remonstrate with Mr Kirk and to accuse him of being a road hog.

However district judge John Meehan said the prosecution case had been established beyond reasonable doubt and he fined the fomer MP.

He said Mr Kirk was subjected to an angry and abusive tirade, adding it was unfortunate that “a man who has given many years of the highest public service” should find himself facing such a verdict in court.

“I am obviously not letting it rest here,” Lord Maginnis said outside the court.